New York, NY (April 24, 2018) — As reports speculate that the Senate will postpone the scheduled Wednesday confirmation hearing for President Trump’s nominee for VA Secretary Dr. Ronny Jackson, Iraq and Afghanistan Veterans of America (IAVA), the leading voice of the Post-9/11 generation of veterans, revealed results to an exclusive poll on veteran support for the new nominee. The poll, conducted over a two-day period and surveying more than 2,266 IAVA veterans and servicemembers, found that the majority of veterans do not support Dr. Jackson’s nomination, and 38% oppose him for the critical position. 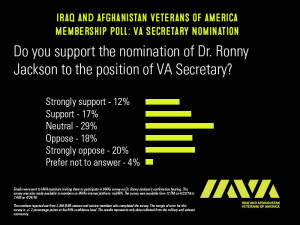 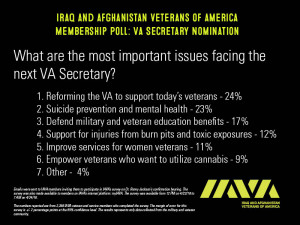 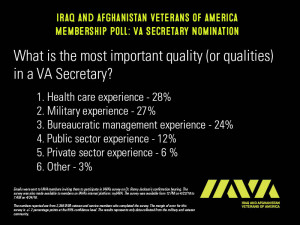 “IAVA members nationwide have deep and rising concerns about the nomination of Rear Admiral Jackson. We have now been through seven VA Secretaries since the start of the war in Afghanistan. The Secretary of VA is responsible for the second largest Department in the federal government — one with a budget of more than $180 billion and over 300,000 staff, the welfare of millions veterans, and critical programs like the Post-9/11 GI Bill and cemeteries nationwide. IAVA members know how important this nomination is, and they’re making their voices heard. On this critical leadership position at this turbulent time, American can not afford a misfire by the White House.” said Paul Rieckhoff, Founder and CEO of IAVA.

“The VA Secretary is one of the single most important voices in America for all veterans. It is critically important that the person leading the VA understands and is prepared to handle the responsibilities and the challenges that go along with the job. IAVA members nationwide are calling on the Senate to do its job at this defining time and ensure that any nominee for VA Secretary will live up to this awesome responsibility. Without stability in VA leadership, veterans nationwide are being left behind, our priorities are stalled and our national security is jeopardized,” continued Rieckhoff.

IAVA will continue to pressure all elected officials and leaders in Washington, including the acting VA Secretary, to work with leadership from both sides of the aisle to ensure VA is best equipped to care for all generations of veterans, including the 2.8 million Post-9/11 veterans. IAVA looks to any nominee for VA Secretary to devote focus on the 2018 Big 6 Advocacy Priorities outlined in the IAVA Policy Agenda: