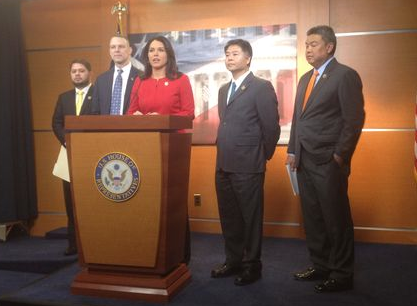 Washington D.C. (March 19, 2015) — Iraq and Afghanistan Veterans of America (IAVA) today joined Congresswoman Tulsi Gabbard (D-Hawaii) and Congressman Scott Perry (R-Pa.) for the launch of the Congressional Post-9/11 Veterans Caucus, a bipartisan group of members who have served in the military after 9/11, and who are dedicated to issues related to our newest generation of veterans.

“IAVA envisioned a caucus to represent our generation. It’s very exciting to see Congresswoman Tulsi Gabbard and Congressman Scott Perry make that vision a reality today,” said Iraq and Afghanistan Veterans of America (IAVA) CEO and Founder Paul Rieckhoff. “After more than 13 years of Americans in combat, it is encouraging to see these members of Congress band together to tackle veterans’ issues head on. As veterans themselves, they have a keen understanding of the critical challenges faced by post-9/11 veterans, servicemembers and their families. In 2015 our country will continue to welcome home the thousands of brave men and women who wore the uniform. Ensuring quality care for these veterans should not be a partisan or political fight. As the leading vets organization that inspired bipartisan support behind the Clay Hunt SAV Act, we look forward to working with this caucus to build on the success of bringing lawmakers from both sides of the aisle together to support veterans. We hope this caucus will bridge the military-civilian gap and provide quality solutions to veteran suicide, reforming the VA, lowering veteran unemployment, protecting the New GI Bill and more.”