TriStar Motorsports and the Iraq and Afghanistan Veterans of America (IAVA) are proud to announce a new partnership for the NASCAR XFINITY Series’ Boyd Gaming 300 at Las Vegas Motor Speedway this weekend. The IAVA will grace the hood and quarter panels of the No. 14 Toyota Camry piloted by Rookie of the Year contender, Cale Conley.

Founded in 2004 by an Iraq veteran, the IAVA has quickly become the nation’s largest nonprofit, nonpartisan organization representing new veterans and their families. With nearly 300,000 veterans and civilian supporters nationwide, IAVA is the only 21st Century veterans’ service organization (VSO) dedicated to standing with the 2.8 million veterans of Iraq and Afghanistan from their first day home through the rest of their lives.

“Since last summer when we launched the Convoy to Combat Suicide, Cale Conley has been a true supporter of the veterans community,” said IAVA CEO and Founder Paul Rieckhoff. “IAVA is honored to have our logo wrapped on his No. 14 Camry and work alongside him as he continues to be a rising force in NASCAR. Cale is a dynamic motivator, spreading awareness about critical veterans’ issues everywhere he races. We look forward to seeing what lies ahead for him in 2015!”

In addition to their presence on Conley’s No. 14 Toyota Camry, IAVA and the TriStar Motorsports drivers will be at the Holiday Inn Club Vacations at Desert Club Resort on Friday, March 6th from 6:00-8:00pm PT. Fans can visit the resort to participate in raffles, meet the drivers, and learn about the work that the IAVA does. A portion of revenue booked over the race weekend will be donated by Holiday Inn Club Vacations to the IAVA.

“It is an honor to have IAVA on the car,” said Conley. “The struggles that servicemen face returning home from war is something I cannot begin to even fathom. I was so struck when I heard the statistic that there are 22 veteran suicides on average daily in the United States. I am so proud to help raise awareness and support the cause. These are the true heroes and the reason that we get to race each weekend.” 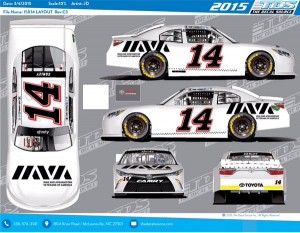 Be sure to tune into the Boyd Gaming 300 on Fox Sports 1, PRN and SIRIUS XM Channel 90 on March 7th at 4:00PM ET.
About TriStar Motorsports NC, LLC: