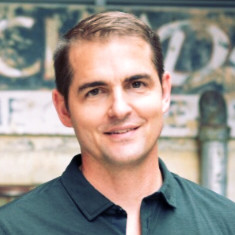 Dr. Tommy Sowers is a multi-sector leader who has led in the political, military, governmental, academic, corporate, entrepreneurial, non-profit and philanthropic worlds.

He is currently the Pentagon’s Southeast Regional Director for DOD innovation efforts, connecting academic and venture communities to help solve national security problems. As part of his role, he will return to Duke to teach courses at the intersection of national security, technology and academia.

From 2015-2018, he was cofounder and CEO of GoldenKey. A Durham based venture backed firm disrupting the buying and selling of homes, GoldenKey has saved home buyers/sellers over $1.7M in fees in hundreds of transactions across America. GoldenKey has raised over $3.7M in venture capital including a round led by Lowe’s Ventures and has been featured in TechCrunch, WSJ, and the Washington Post. GoldenKey was acquired in May 2018.

Prior to founding GoldenKey, in 2014-2015 Sowers served as visiting faculty at the Sanford School of Public Policy and Assistant Director of the Hart Leadership Program at Duke University. From August 2012 to April 2014, Dr. Tommy Sowers was nominated and confirmed as Assistant Secretary of Public and Intergovernmental Affairs at the U.S. Department of Veterans Affairs. As the youngest Senate confirmed assistant secretary in the Obama Administration, Dr. Sowers directed departmental communications and oversaw programs

involving intergovernmental relations, homeless veteran programs and, with the Ad Council, conceived, resourced and developed the VA’s first national outreach campaign of this century. In 20 months, Dr. Sowers visited 43 states (NPR profiled his visit to the most remote Alaskan village here) engaging with veterans and the tens of thousands of organizations seeking to support them.

Prior to joining VA, Dr. Sowers was a management consultant with McKinsey & Co. where his work focused on advising private equity clients on strategy, valuation and due diligence. Previously he served as senior advisor to Iraq and Afghanistan Veterans of America. In 2010, he was the Democratic nominee for the U.S. Representative in Missouri’s 8th congressional district.

An 11 year veteran of the U.S. Army, Sowers began his military career in 1998, when he was commissioned into the Corps of Engineers. He led a combat engineering platoon in support of Peacekeeping Operations in Kosovo. In 2004, Sowers graduated first in his class at the Special Forces Qualification Course. Between 2004- 2006, Sowers deployed to Iraq twice as a Green Beret, leading and advising U.S. and Iraqi units on counterinsurgency operations. Between 2006 and 2009 Sowers served as an assistant professor in the Department of Social Sciences at the United States Military Academy.

A 1998 graduate of Duke, Sowers earned his MSc and PhD from the London School of Economics. He lives in Chapel Hill with his wife Ericka, his daughters Alyson (3), Catherine (2), Juliet (1), one old beagle and four young chickens.