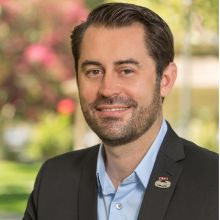 Tom leads Twitter’s global crisis response program, is responsible for U.S. state and city government relations at Twitter, and manages the Political Action Committee (#PAC). Prior to joining Twitter, Tom was the Chief Policy Officer of Iraq and Afghanistan Veterans of America (IAVA) in Washington D.C. where he oversaw IAVA’s legislative, research and political departments. During that time Tom was also a national media spokesperson for veterans issues, regularly appearing across TV, radio, and print. Prior to working in Washington, Tom spent 10 years in the United States Army serving as both an enlisted Civil Affairs Specialist and a Cavalry Officer deploying to both Bosnia in 2000 and Baghdad in 2005. He is @TomTarantino on Twitter.