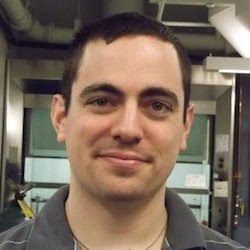 Steve grew up in Monroe, CT. After a couple of years at Boston University, he decided to leave college and join the Army. In 2006, he enlisted as an infantryman and was assigned to 2/504th PIR, 82nd Abn Div. Steve did one 14-month deployment to Iraq, with half of the deployment spent doing convoy security in Anbar Province and the other half participating in Operation Defeat al Qaeda in the north. After separating from the Army in 2009, he returned to college, earning his BS in chemistry in 2012. Steve is now the happy father of a daughter, with another baby on the way, and is in his fourth year of working towards a PhD in biophysical chemistry.