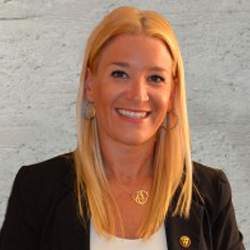 Ryan Manion Borek has dedicated her life to supporting our nation’s military, veterans and families of fallen heroes. She is inspired by the leadership and sacrifice of her brother 1st Lt. Travis Manion, USMC, who made the ultimate sacrifice in the Al Anbar province of Iraq while drawing fire away from his wounded comrades on April 29, 2007. Serving as the President of the Travis Manion Foundation since 2012, Manion Borek leads a national movement focused on assisting veterans and families of the fallen. As a highly regarded advocate for the military community, she is a nationally recognized speaker appearing on major media outlets and speaking to students across the country on leadership. Manion Borek was recognized in 2015 with the President’s Lifetime Achievement Award for Volunteer Service. She also serves as a board member for the National Association of Veteran-Serving Organizations, was the recipient of the 2014 Joseph D. Helton, Jr. Award for Leadership, the 2013 Hillier (Ignite) Warrior for Warriors Award, and the 2011 Commodore John Barry Distinguished Citizen Award, among other honors. Manion Borek has been a trusted advisor to IAVA on issues related to military families and leadership development.