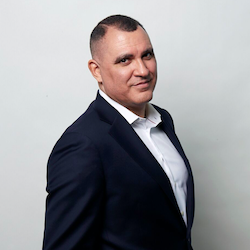 Rafael Amadeus Hines is a native New Yorker with Panamanian, Jamaican and Irish roots, who was born and raised on Manhattan’s Lower East Side. Dipping into his early Alphabet City memories, he loosely based many of the characters in his military-thriller, Bishop’s War, on the people he grew up with, and adapted many of his own experiences into the book as well.

Rafael is a former jazz club owner and restaurateur, and has worked in the financial and energy markets for over twenty years. On 9/11 he watched his office along with all the others in the Twin Towers come crashing down and, like many New Yorkers on that day, he anticipated follow up attacks to take place throughout the city. Years later he envisioned a lone citizen soldier preventing these attacks and the hero Special Forces Sgt. John Bishop appeared on paper.

Rafael is the father of three and still lives in the New York neighborhood where he grew up. A voracious reader of suspense thrillers, his writing career was inspired by legendary artist-authors Elmore Leonard, John Sandford, Stephen Hunter, James Lee Burke, and Tom Clancy. He is currently working on the second novel in the Bishop series.