Melissa Bryant is the Chief Policy Officer for IAVA. She leads IAVA’s policy division, overseeing the legislative, research, and intergovernmental affairs departments. Melissa spearheads the development of our annual policy agenda and advocacy campaigns in collaboration with IAVA leadership, and leads IAVA’s engagement with the White House, government departments and agencies, particularly the Departments of Defense and Veterans Affairs, Veteran and Military Service Organizations, and advocacy organizations. 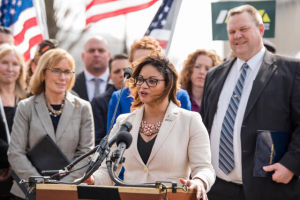 A former Army Captain and Operation Iraqi Freedom combat veteran, Melissa has an extensive record of public service, having served on both active duty and in the civil service as an intelligence officer prior to joining IAVA. A plans, policy, and operations expert with 15 combined years of experience in the federal government, she has served in key leadership positions with the Defense Intelligence Agency, the Joint Staff, the United States Military Academy, and Army Intelligence. She was successful in building “coalitions of the willing” to advance operational and strategic objectives while developing and implementing plans and policy for the defense and intelligence communities.

Melissa is a spokesperson for IAVA, and has been featured several times on MSNBC with Andrea Mitchell, Katy Tur and others, HLN, in The Washington DC 100, and more.