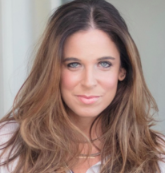 Lauren Rieckhoff has been representing top talent and thought leaders worldwide in brands, entertainment, fashion and philanthropy for two decades.Starting in the late 90’s with HBO’s hit series Sex & the City, Lauren quickly found a niche in the entertainment business. By 2002, she joined Creative Artists Agency (CAA) as the first female Agent in the New York office. Following a 14 year tenure, Lauren left the Agency to pursue her entrepreneurial passion of co-founding a boutique strategic advisory in the heart of downtown Manhattan.

According to Alphabet Chairman Eric Schmidt, “I’ve worked with Lauren for many years. She has an unusual knack for putting the right people together to solve almost any problem imaginable.”

Her stellar reputation and continued success is based on her philosophy of applying the principles of traditional talent representation to emerging business models. Forging strategic influencer and content partnerships between the world’s top brands, media companies, content creators and talent has uniquely positioned her to be sought after by today’s most inspired companies.

Lauren is a dedicated supporter of Iraq & Afghanistan Veterans of America (IAVA). She is currently on the Board of Trustees for Compass Charter, a progressive elementary school in Brooklyn and is a member of Everytown.org. Previously, she served 4 years as Vice President of the NY Board for Step Up Women’s Network, a national, non-profit dedicated to training the next generation of female philanthropists.