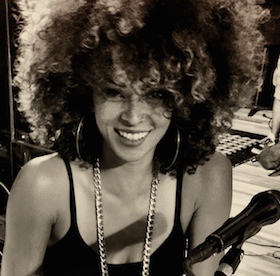 Kandace Springs sat down at the piano at Capitol Studios and sang an impassioned rendition of Bonnie Raitt’s “I Can’t Make You Love Me.”

Stunned by her arrangement and performance, Don Was (President, Blue Note Records) offered her a record deal on the spot, after hearing only one song. Kandace’s self-titled 4 song EP was released on Sept 30th and she made her television debut on Late Night w/ David Letterman on Oct 3.

It was that same inherent soulfulness that originally caught the attention of Carl Sturken and Evan Rogers at SRP, the production team that signed pop powerhouse Rihanna. Kandace who hails from Nashville, has since relocated to New York and is now working on her debut solo album to be released on Capitol/Blue Note Records in spring 2015.

She is joined by co-executive producer Eli Wolf (Norah Jones) and a team of notable co-writers including her production team Carl Sturken & Evan Rogers of SRP (Rihanna), Pop & Oak (Alicia Keys), and Andre Harris (Jill Scott). The record is influenced by a diverse array of Springs’ favorite artists ranging from Ella Fitzgerald to Lauryn Hill, and is sure to be an inventive tribute to fresh beats and old soul.