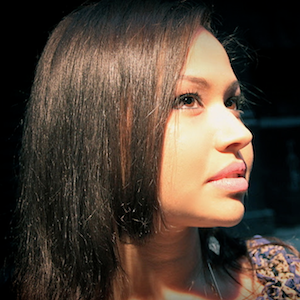 Emy Cee is an R&B singer raised in Spanish Harlem, New York. Her music influences include the big forces in music and R&B, divas such as Chaka Khan, Beyonce, Alicia Keys, Mary J. Blige, Etta James, Aretha Franklin and many more. Although growing up she listened to hits from Mariah Carey, and Whitney Houston, she didn’t bloom into the singer she is today until the tragic death of Selena Quintanilla, it was like she was a born again, going from a shy girl to a natural star. Emy was soon enrolled for vocal/music lessons and was trained by Ms. Gloria DeNard of Manahouse Workshops in Spanish Harlem, NY. During this same period Emy met the late classical pianist Carlos Correa and through him she learned the piano. She joined the choir at her local church, which Carlos directed, here she was introduced to classical performing, singing soprano pieces such as Franz Schubert’s “Ave Maria” on of her favorites.
During her high school years with support of her teachers, classmates and Music Director, Mr. Kenneth Harris, Emy often performed as lead singer and pianist of her high school band. An NYC girl at heart she started covering songs by her favorite divas and that’s when the love for performing was born. These events are the foundation that makes her the musician she is today.
Following the attacks of 9/11 Emy took a break from music to serve her country. Now a Veteran and seasoned singer, Emy Cee has performed on many stages across the US alongside a number of talented musicians. The most memorable was performing with Roger Waters of the legendary Pink Floyd Band, along side GE Smith, JW Cortes, and others at Madison Square Garden, which also featured a lineup that included Bruce Springsteen and comedian Jerry Seinfeld. The performance was a benefit concert by the Bob Woodruff Foundation in support of wounded veterans.
In addition to music, Emy Cee can be heard in some popular brand commercials, calls, even tutorials around the globe via her booming voice over career.
In recent months Emy has dabbed in to the world of acting and scored a small cameo appearance in the film iCreep, starring Adrian Martinez (Focus) and Dascha Polanco (Orange is the New Black).
Emy Cee is currently working on a fusion music project in NYC and continues to support veterans through the arts.