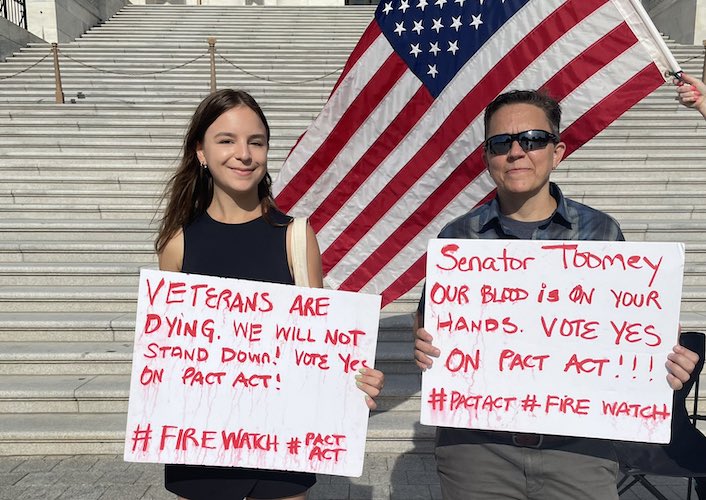 By 11 p.m. Friday, all the senators who had roamed the halls of Congress this week were gone from Capitol Hill.

But the veterans weren’t.

A contingent of about 15 veterans — most of whom had spent the prior 48 hours meeting with lawmakers to discuss new toxic exposure legislation — were camped out on the Senate steps even as rain began to come down steadily. More were expected to arrive after midnight.

Plans called for an around-the-clock fire watch of advocates at the Capitol to last until Monday afternoon, when the Senate is again scheduled to vote on the Promise to Address Comprehensive Toxics Act, better known as the PACT Act. The goal was to emphasize — throughout the weekend — the importance of action on the issue, even if no lawmakers were present to see it.

“We’re here to let the Senate know that we’re not going home and neither should they until they get the PACT Act done,” said Patrick Murray, director of the Veterans of Foreign Wars National Legislative Service.

Veterans groups have been searching for ways to bring pressure and urgency on senators since Wednesday, when a procedural vote on the measure failed in surprising fashion.

The measure — which could expand medical options and benefits for as many as one in five veterans living in America today — passed out of the Senate in June by a comfortable bipartisan 84-14 margin.

But after it was approved with technical corrections by the House, Senate Republicans chose to block the bill, with 27 GOP members unexpectedly changing their vote from the previous month.

Reasons for the surprise opposition include lingering concerns about how some benefits spending will be classified in future budgets and anger over unrelated health care and climate change legislation announced by Senate Democrats this week.

But the veterans standing watch outside the Capitol said none of those factors justify stalling the sweeping veterans policy measure when passage appeared all but certain after years of advocacy and lobbying work.

Kristen Rouse, a board member of Iraq and Afghanistan Veterans of America and an Army veteran with three tours in Afghanistan, traveled from New York to Washington, D.C., on Friday to be part of the event.

“Veterans are sick and dying,” she said. “I may be next. I was exposed to thick constant smoke for a full year in Afghanistan. The very least I can do is show up to pull a shift on the Capitol steps with these fighters.

“We need the Senate to come back and get to work. Suffering veterans don’t get any breaks. They shouldn’t be on recess or whatever they’re doing. Veterans need help now.”

Advocates brought coolers, camp chairs and pizza to their late-night protest shift. They sent texts to fellow veterans about the effort throughout the night and passed time by watching clips of Jon Stewart, the comedian-turned-activist who spoke at a veterans rally on Capitol Hill Thursday, skewering Republicans on social media for their opposition to the bill.

Veterans said several House lawmakers — but no senators — stopped to chat on Friday afternoon to offer support for the effort. Other passersby approached to ask about the bill and what it could mean for the veterans community.

The plan, which calls for about $300 billion in spending over the next 10 years, would establish a presumption of service connection for 23 respiratory illnesses and cancers related to the smoke from burn pits used in Iraq and Afghanistan. It would also extend Veterans Affairs medical care for those vets, from five years after service to 10 years.

It would also provide new benefits for veterans who faced radiation exposure during deployments throughout the Cold War; veterans dealing with hypertension and monoclonal gammopathy from the Vietnam War, and new Agent Orange presumptive status for veterans who served in Thailand, Laos, Cambodia and Guam during the 1960s and 1970s.

Senate Democrats said they are hopeful that a deal can be reached to move ahead with the bill by Monday afternoon, when the chamber is expected to return from a weekend break for a final week of work before its month-long summer recess.

As the weekend began, the advocates on the Senate steps were hopeful that their vigil there will only last until that Monday procedural vote.

“This is a bill that should have been passed a month ago,” said Aleks Morosky, deputy director of government affairs for Wounded Warrior Project. “When it came back over to the Senate, the people that voted for it last time, they chose to vote no on it. And that is unacceptable.

“So, we’re here to get the Senate to pass this bill without any more delays.”

This piece was originally published by the Air Force Times on July 30, 2022.