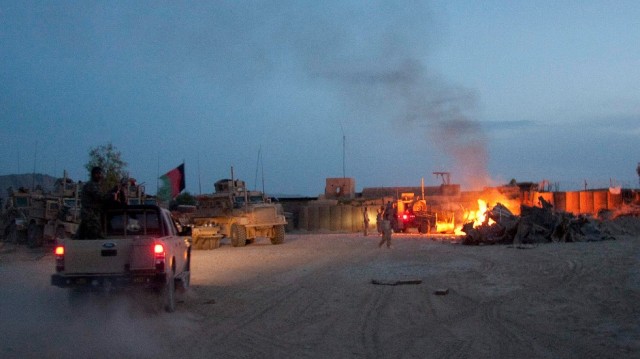 Veterans’ advocacy groups lashed out on Thursday after Senate Republicans blocked a much-anticipated bill aimed at expanding care for veterans who were exposed to toxins during military service.

The Sgt. First Class Heath Robinson Honoring Our PACT Act was the product of a year of negotiations between the House and the Senate, and Wednesday’s vote was largely expected to be a victory for veterans in need of care.

But the majority of GOP senators voted against advancing the bill, infuriating its Democratic sponsors and the veterans who have been pushing for it, who focused their ire on Sen. Pat Toomey (R-Pa.)

“This is total bullshit,” Sen. Kirsten Gillibrand (D-N.Y.) said during a press conference in front of the Capitol on Thursday.

“We had strong bipartisan support for this bill. And at the eleventh hour, Sen. Toomey decides that he wants to rewrite the bill, change the rules, and tank it.”

Tom Porter, executive vice president of governmental affairs for the Iraq and Afghanistan Veterans of America, pointed out that some Republicans who voted against the bill are veterans.

“How can fellow veterans turn their backs, and stab us in the back like that,” Porter said.

The Senate voted 55-42 to advance the PACT Act, falling short of the 60 votes needed to overcome a filibuster. The upper chamber passed the bill last month by an overwhelmingly bipartisan 84-14 vote, and the House passed the bill earlier this month by a vote of 342-88.

Senate Majority Leader Charles Schumer (D-N.Y.), who initially voted “yes,” changed his vote to “no” and brought a motion to reconsider.

The failed vote came on the heels of Schumer and Sen. Joe Manchin (D-W.Va.) unveiling a budget reconciliation bill which addresses climate, health care and taxes. However, Gillibrand said she didn’t think Wednesday’s vote was in retaliation for the package.

In floor speeches on Tuesday and Wednesday, Toomey said he opposed the bill because it moves $400 billion from discretionary spending to mandatory spending, which he called a “budgetary gimmick.”

The Pennsylvania Republican proposed to amend the bill by moving that funding back to discretionary spending, which is subject to annual congressional appropriations.

After Wednesday’s vote, Toomey said the failed cloture vote allows the upper chamber to amend the bill, adding that it was a “pretty easy fix.”

“Once that’s done, this bill sails through this chamber and goes to the president and gets signed into law,” he said.

In a floor speech on Thursday, Senate Minority Leader Mitch McConnell (R-Ky.) said that Toomey’s amendment should’ve been offered for a vote.

“Even on legislation this major and this costly, the Democratic leader tried to block the Senate from any semblance of a fair amendment process,” McConnell said, referring to Toomey’s amendment.

“As written, the legislation will not just help America’s veterans as designed, it would also allow Democrats to effectively spend the same money twice and enable hundreds of billions in new unrelated spending on the discretionary side of the federal budget,” he said.

But veterans’ advocates weren’t buying Toomey’s arguments on Thursday, as they lashed out at him and the GOP for blocking the care that veterans need.

“Every day that this delay goes on, veterans are unable to receive care,” said Lawrence Montreuil, legislative director for The American Legion. “This is wrong. We will not stand by and allow veterans to be denied their duly owed health care.”

The PACT Act would’ve expanded Department of Veterans Affairs benefits to veterans who served in the post 9/11-era who were exposed to toxic burn pits during their military service.

It would’ve also added 23 burn pit-related illnesses to the VA’s list of presumptive service connection, meaning that veterans wouldn’t have to prove that their illness was caused by military exposure. And it would have expanded care for veterans who were exposed to Agent Orange in Thailand, Cambodia, Laos, Guam, American Samoa and Johnston Atoll.

The legislation was named after Sgt. 1st Class Heath Robinson, who died in 2020 following toxic exposures during his service in Kosovo and Iraq.

“They voted for all of us to suffer. They are endorsing our suffering,” Zeier said. “The next time I come back here, it better be to sign the damn bill at the White House, because I’m sick and tired of this bullshit.”

Despite their anger, lawmakers vowed to keep pushing to pass the bill. Sen. Sherrod Brown (D-Ohio) said he’s pushing for lawmakers to stay in Washington until the bill is passed, though it’s unclear if his efforts will succeed given the Senate is expected to leave town next week.

Gillibrand vowed to keep bringing up the bill through unanimous consent request until it passed. But she also encouraged advocates to pressure the 25 Republicans who changed their votes to reconsider.

“We have to go to these 25 offices,” she said. “We have to make sure every one of these senators understands that they have just sentenced veterans to death because they will not have the health care that they have earned.”

This piece was originally published by The Hill on July 28, 2022.