READ: Beyond our borders: The fight for women’s equality in Afghanistan 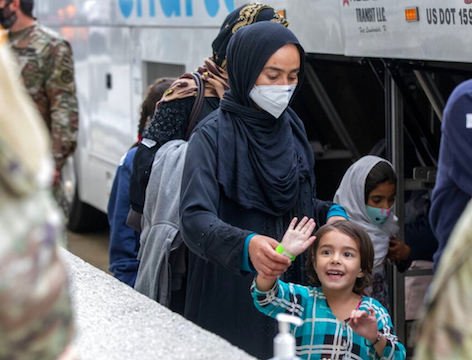 For veterans like me, the threat to Afghan women and girls’ freedoms is personal — for although U.S. troops have come home, the war is far from over for the Afghan people.

During the 20 years of U.S. presence in Afghanistan, rights and access to opportunities for Afghan women and girls expanded substantially. While the U.S.’s original mission in Afghanistan was not related to gender equality, advancing Afghan womens’ rights was an important goal of U.S. reconstruction efforts between 2001-2021. Yet, because of the Taliban, Afghanistan continues to be one of the most challenging places for women to live today.

The deteriorating situation of Afghan women and girls is apparent in all indicators of gender equality— education, health, safety, autonomy, social standing, political and workforce representation and influence, legal justice, maternal mortality rates, and much more.

The U.S., with all of our resources and influence, has a moral responsibility to look beyond our borders and uplift Afghan women and girls. This crisis has drawn repeated calls for their protection, from advocates as high up as all 24 female U.S. senators. However, our country’s commitment to uphold the rights of Afghan women and girls has not yet materialized.

As substantiated in our inaugural national gender strategy, the U.S. needs to take immediate action to implement an “interagency plan” that provides a roadmap on how to advance gender equality through strategic, effective actions between U.S. agencies, international organizations and other countries. This can be achieved through an increase in targeted humanitarian aid and specific U.S. legislative action.

Even before the Taliban regained control over Afghanistan, humanitarian and gender specific efforts in Afghanistan were heavily reliant on foreign aid. Since 2021, most sources of aid have been eliminated or reduced, increasing Afghan’s dependence on foreign aid. But just as the Taliban’s control of Afghanistan triggered a reduction in aid, it also prompted an economic crisis that aggravated the humanitarian situation and individual security of Afghans.

While some agreements have been reached to continue funding and maintaining critical humanitarian efforts in the country, they are not sufficient enough to address critical needs. The widening gap between the level of aid being delivered and the level of demonstrated need is a life threatening crisis for Afghan women. Among them, an estimated 98.2% have lost economic opportunity since the U.S.’s withdrawal from Afghanistan — according to a recent survey of applicants of the Special Immigrant Visa program. This is especially concerning, considering 88 percent of them reported being the primary breadwinner for their household.

Afghan women and girls are directly and disproportionately harmed under Taliban rule, exacerbating the backsliding of their rights. With Afghan women and girls facing immediate threats to their wellbeing and lives, there is no question that Afghanistan is at the forefront of the global fight for gender equality.

Uplifting women and girls in other parts of the world uplifts women and girls everywhere. Breaking down gender barriers is a large feat that requires the involvement of global citizens.

The motive, desire and responsibility to support Afghan women and children is all accounted for, so why is it taking so long to enact the measures necessary to address this crisis and “to advance the full participation of all people — including women and girls — in the United States and around the world”?

We rightfully made promoting gender equality a large part of our mission in Afghanistan, and now I am asking our legislators to take this crisis off the back burner and work alongside experts on the unique political and cultural environment in Afghanistan to best support Afghans.The polls are telling a new story about Democrats and the midtermsThe US must close the gap between ends and means in Ukraine

Every American remembers the stories and fear voiced by the Afghan people as the U.S. withdrew from Afghanistan. And pleas from Afghan women and girls, and Afghani military allies are not going to disappear from our memories anytime soon.

The time to rejoin the fight for gender equality in Afghanistan passed by 350+ days ago, but if the U.S. takes action immediately, we may still be able to preserve the rights and freedoms that Afghan women have been fighting their whole lives for.

Kaitlynne Hetrick is the Associate Director of Government Affairs of the Iraq and Afghanistan Veterans of America (IAVA).

This piece was originally published by The Hill on August 26, 2022.