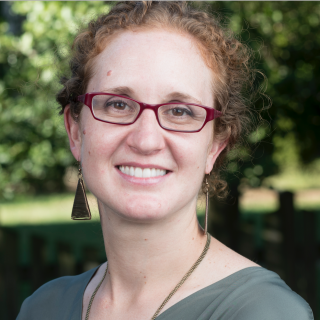 At IAVA: Lindsay runs IAVA’s communications, including traditional media (TV, radio, podcast, newspapers, online magazines), social media, email, and anything else that involves telling the world about the amazing work of IAVA.  She also drives IAVA’s litigation strategy, enabling IAVA’s voice to reach American courts and ensure that veterans’ voices are heard when their issues are at stake.

Lindsay is a spokesperson for IAVA.  She has been featured on television (including CNN, MSNBC, FoxNews), radio and several podcasts.  Her written work has appeared in various publications including the Globe and Mail, War on the Rocks, Joint Force Quarterly, and the Wall Street Journal.

Professional Background: Lindsay served in the Marine Corps for eight years on active duty as a judge advocate and remains in the Reserves.  She deployed to Afghanistan in 2010-2011, and was also stationed in Okinawa and Washington, DC.  While serving in DC she served in a few different assignments, including the National Security Council Staff as a White House Fellow from 2014-2015.  Before joining the Marine Corps she was an associate at Arnold & Porter LLP.

After transitioning off of active duty Lindsay was a political appointee in the Pentagon from 2015-2016, after which she moved to Canada with her family for two years. She was the Council on Foreign Relations’ first International Affairs Fellow in Canada during that time.  Lindsay joined the IAVA staff in early 2019.

More about Lindsay: Lindsay is a graduate of Duke University, Harvard Law School and the Kennedy School of Government at Harvard University.

As a Marine Corps judge advocate, Lindsay’s first assignment as a lieutenant was to be a “Marine defending Marines.” Marines with legal concerns came to her for help, and from there she was inspired to devote her life to serving those who serve us – America’s service members and veterans.

Ask Lindsay about: Lindsay is married to a retired Canadian Forces Officer, and they have two young boys.  Lindsay is a native New Yorker, and elated that she gets to live in her hometown again, after a long time away.

Lindsay is one of the United States and Canada’s leading thinkers on arctic security, and a widely-published expert on national security law and policy.  She also loves to ski, to scuba dive, to run, and to cook.