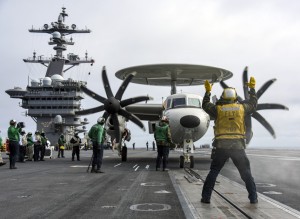 All but a very select few organizations are paying for the technology themselves. Nonprofits like mine, Iraq and Afghanistan Veterans of America, are using dollars out of very shallow cash reserves to pay for technology. | Chronicle of Philanthropy >>

So what’s his plan? On Trump’s website, there’s a 10-point V.A. reform “vision.” But that plan basically amounts to firing bad managers, hiring better ones and then taking some other unspecified steps that fall under the heading of “modernization” while maybe putting more money toward providers. | Newsweek >>

The Department of Veterans Affairs’ Veterans Health Administration’s campaign aimed at limiting the healthcare facility-associated infections (HAIs) of methicillin-resistant Staphylococcus aureus (MRSA) still records consistent progress. The rates of the cases recorded with the Staphylococcus have significantly dropped during the period when the research was conducted. | Tech Times >>

Iraqi special forces and their Shia militia allies have been trying to drive IS from its stronghold in the northern city of Mosul. They entered eastern districts in November but IS have since slowed their advance towards the centre. | BBC News >>

The deployment to Helmand will be the Marines’ first to the southern province since they left in 2014 as the U.S. declared an end to its combat mission. Since then, Afghan security forces, still backed by Washington in the form of air strikes and hundreds of advisors, have struggled to contain the Taliban advance in Helmand. | Newsweek >>

Iraqi counter-terrorism forces pushed to within several hundred metres (yards) of the Tigris and a strategic bridge on Saturday, the closest they have been, after staging an unprecedented nighttime assault the day before in a nearby district, a spokesman said. | CNBC >>

“It’s not because we felt we had some burgeoning, endemic problem,” Fanning told Army Times Jan. 4. “It’s because one is too many, and it’s always good to take a knee, take a breath, and see if there’s something new or that has developed because something’s changed.” | Army Times >>

Autonomous vehicles have infiltrated much of the military, from airborne surveillance to all manner of ground-based operations. But the Navy remains a mostly human-controlled operation—with the demand for robotic tech focused on conflicts in Iraq and Afghanistan, it simply hasn’t trickled down to aquatic operations yet. | Wired >>

The students, much like new Army recruits, learned to be part of a larger team, coming together with peers from different demographics with different skill-sets. The Army is also a team, she said. And Army leaders are the coaches, there to push the troops to improve. | Fayetteville Observer >>

They were only 21, but Jason and Rachel clicked: Rachel advocated strenuously for his medical care at the VA hospital, and Jason was a calming, steady influence on her. In the hospital, he had to relearn how to do basic tasks, while still feeling “the fingers, the toes, everything, but it just doesn’t hurt,” he said, “which is nice.” | The New York Times >>

Interacting with bottlenose dolphins in the Florida Keys provided physical and emotional therapy Sunday to more than 30 wounded U.S. military veterans, at the conclusion of the three-day Soldier Ride cycling event down the Keys Overseas Highway. | CBS Miami >>