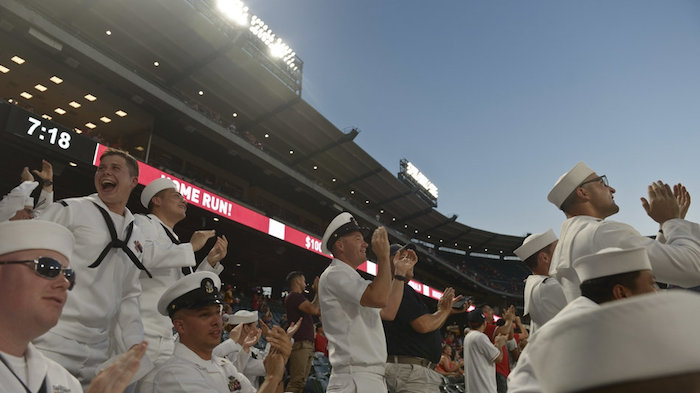 After their service, the Department of Veterans Affairs (VA) works to fulfill this same promise on behalf of a grateful nation, enabled by a budget larger than those of the State Department, the Department of Homeland Security, and the entire U.S. intelligence community combined. | Foreign Affairs >>

Reeves, who would oversee VA cemeteries in his new role, serves president of the National Association of State Directors of Veterans Affairs. He is a retired surface warfare officer who served as an enlisted airman before joining the Navy. | Military Times >>

“[W]e find the VA’s practices to be within recommended federal and ethical standards as established by the U.S. Department of Agriculture and the National Institutes of Health,” the group wrote in its Sept. 1 letter to Cochran. “Based on this information, The American Legion opposes the amendment to the minibus … and encourages VA to continue research vital to advancing the medical well-being of our nation’s veterans.” | Washington Examiner >>

As long as Afghanistan remains a geopolitical battleground, foreign powers will always fight over it in destabilizing ways. And as long as the Pashtuns remain without a country, separated by an artificial border, they will always try to destabilize the government in Kabul. The current situation is a recipe for permanent instability in the region and within the country. No number of U.S. troops can fix that. | The Huffington Post >>

The mood was celebratory when Prime Minister Haider al-Abadi arrived in Mosul on July 9 to declare the city liberated from ISIS. Abadi’s presence had marked a momentous victory in a gruesome battle that had raged for over nine months, claiming the lives of tens of thousands of civilians and displacing nearly half a million more. | Vice >>

Victory in Afghanistan has eluded Trump’s predecessors: President George W. Bush, who launched the war after the Sept. 11, 2001 attacks, and President Barack Obama, who surged U.S. troop levels to 100,000, but ultimately failed in fulfilling his promise to bring the conflict to a close before leaving office. As Trump now takes his turn at the helm, he faces many of the same challenges that have bedeviled those previous presidents and left some U.S. officials deeply uncertain about whether victory is indeed possible. | The Philadelphia Tribune >>

Sometimes the true value of an invention isn’t obvious until people start using it. Consider what happened to inventor Nate Ball and his powered ascender. About 15 years ago, Ball was an undergraduate at the Massachusetts Institute of Technology when the U.S. Army approached MIT with a request: Can somebody build a powered device that can pull somebody up a rope, like Batman does? (Photo Right) | NPR >>

Hurricane Harvey, a storm of record-breaking proportions, dropped an estimated 27 trillion gallons of water or 51 inches of rain in the two states. Marines supported lead federal agencies and worked closely with state and local officials to conduct search and rescue missions. As flood waters rose, the Marines’ amphibious capabilities, which make them unique among the services, allowed them to swiftly rescue residents in distress. | Stripes Okinawa >>

The business – Rakkasan Tea Company, taking the nickname of Friedman’s Army unit – also anticipates the plan will be profitable. He says many of the varieties he hopes to bring into the country have never been available domestically before, offering new options to tea enthusiasts. (Photo Right) | Air Force Times >>

“They call it a living memorial,” said Henry, of Bloomington, who was an Army nurse and nurse anesthetist for 20 years. “It’s for veterans like me, those who are serving and women of the future.” She recently became the first female member of the American Legion Honor Guard. | Herald & Review >>