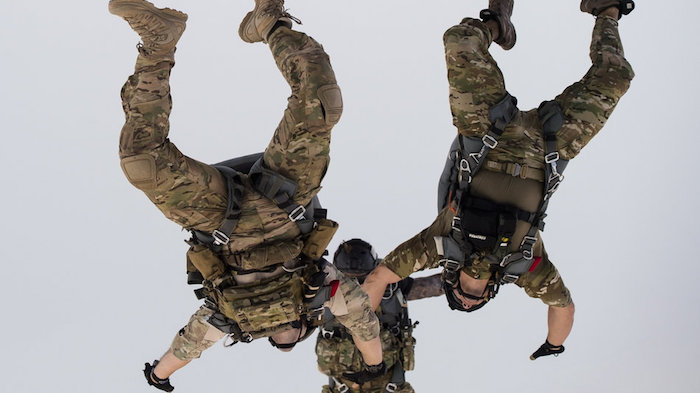 Other treatments hadn’t worked, so Burth opted for a novel procedure that some say is a quick and effective way to quiet the anxiety and agitation that PTSD patients frequently experience. He traveled to the Chicago area, where a doctor injected a local anesthetic into his neck, targeting the nerves that regulate the body’s “fight-or-flight” response to perceived threats. | The Sacramento Bee >>

The home was too antiquated to use, too grand to demolish. So a new veterans hospital was built next door at a fraction of the cost of renovation. The Department of Veterans Affairs, seeing no reason to waste money on hiring a wrecking ball, simply locked the doors of the soldiers home, which veterans had fondly referred to as Old Main, letting it slowly crumble away through what one local preservationist called “demolition by neglect.” | The New York Times >>

An Islamic State convoy stranded in the Syrian desert for five days has split up, and some fighters may have found their way into Iraq despite the U.S. military’s determination to stop them from reaching ­militant-controlled territory, ­Syrian activists and Iraqi officials said Sunday. | The Washington Post >>

“The secretary has determined we must simplify our accounting methodology and improve the public’s understanding of America’s military commitment in Afghanistan,” said Dana W. White, the Pentagon’s chief spokeswoman. Before Mr. Mattis sends 4,000 more troops to Afghanistan, as he is expected to do under President Trump’s new strategy for the war there, he has said he wants to know how many troops are on the ground. | The New York Times >>

“A stolen Iraqi artifact was returned to the Government of Iraq, yesterday. U.S. Embassy [officials] met with the Deputy Minister of Culture for Antiquities and Heritage Affairs Qais Rasheed to return an antique chess set, owned by Saddam Hussein, stolen in 2003 and recovered by the FBI,” a statement from the U.S. mission in Iraq read. | Newsweek >>

Defense Secretary Jim Mattis on Sunday shot back at North Korea’s latest nuclear provocation with a blunt threat, saying the U.S. will answer any North Korean threat with a “massive military response — a response both effective and overwhelming.” While he said America does not seek the “total annihilation” of the North, he added somberly, “We have many options to do so.” | Military Times >>

In a long fight punctuated by moral victories, this may be the biggest yet: The U.S.-led coalition in Iraq and Syria announced Monday morning that it had secured the historic Grand Mosque of Raqqa, a “milestone” in the years-long struggle to rout ISIS and take back its de facto capital.  | Task and Purpose >>

An Iraq War veteran with South Georgia roots just returned home after coming to the aid of more than 30 Texans, stranded after Hurricane Harvey. On Monday, from his Newnan home, Fletcher Sams said that the skills he learned over a lifetime in the rivers and back-woods of Georgia served him on the flood front-lines more than his service as a paratrooper. | WALB >>

“What Team Rubicon does after disasters is really help people with the clean out of their homes,” Team Rubicon spokeswoman Anita Foster said. “We come in and help those homeowners rip out the carpet, take out the sheet rock, help get the mud out of your house or remove those large trees and debris from the wind damage.” | NBC DFW >>

Bridenstine is a Republican congressman who was elected in 2012 after working as executive director of the Tulsa Air & Space Museum & Planetarium. He’s a veteran Navy combat pilot who served during the wars in Iraq and Afghanistan, and who currently serves in the Oklahoma Air National Guard. | UALR Public Radio >>