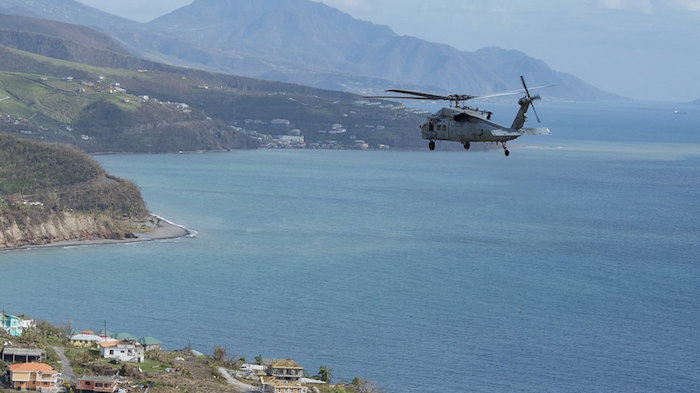 I met Wayne Smith at the Warwick home he shares with his wife of 35 years, Debra. On one shelf, he has a war souvenir – an enemy mortar-head the size of an egg. It’s surprisingly heavy, which Smith said is typical of shrapnel – that’s why it penetrates. It’s a reminder to him of what he had to save his fellow soldiers from. He told me he still pictures the many he lost. I asked if he could share one such case. He paused, looked away, began to talk, then shook his head. “I’m sorry,” he said. “I can’t.” | Providence Journal >>

Internal VA documents show the VA clinic in Northport, N.Y., was trying last year to reconnect with at least 2,100 veterans who had not visited the facility since 2015. Funding for clinics is distributed based in part on the number of patients they see, and the treatments those patients seek, and the VA calculated that reconnecting with that many patients would mean a $9.7 million increase in revenue for the facility in Northport, N.Y. | Washington Examiner >>

On Monday, the Rock and Roll Hall of Famer announced his inaugural concert to benefit VetsAid, his new non-profit to lend a hand to veterans and their families. Keith Urban, Zac Brown Band and Gary Clark Jr will be joining Walsh on the bill Sept. 20, 2017 at the EagleBank Arena in Fairfax, Virginia, with more artists to be announced soon. | People Magazine >>

Iraqi Prime Minister Haider al-Abadi said Kurdish leaders had committed “a strategic and historic mistake” by holding the referendum and gave them until Friday to hand over control of airports and borders in northern Iraq to the federal government. If the order is ignored, international flights to the Kurdish region will be suspended, Abadi said. | The Washington Post >>

Last month, Trump announced his new Afghan strategy. NPR’s Tom Bowman is making his first trip back to Afghanistan since that announcement, and discusses what he’s seeing with Mary Louise Kelly. | NPR >>

Abadi has been trying to unite Iraq since he took office, focusing mainly on sectarian hostilities between Shi’ites and Sunnis, which had triggered a civil war, and Islamic State militants who seized a third of his country before their defeat. The Shi’ite-led Baghdad government and the Kurdish region in the north have struggled for years to resolve differences over oil and other sensitive issues. | U.S. News and World Report >>

In August, Trump issued a presidential memo formally maintaining a ban on any new transgender recruits, halting the use of military funds for sex reassignment surgery, and ordering Defense Secretary Jim Mattis to determine whether transgender personnel currently in uniform should be allowed to stay. | Military Times >>

At the U.S. Air Force Academy, freshmen spend the vast majority of their time with a group of other students who aren’t selected based on shared physical fitness, choice of college major, comfort with mixed-sex bathrooms, preferred bedtime, neatness or any other attribute. They are chosen by a random lottery. | The Washington Post >>

Iraq and Afghanistan Veterans of America – which represents many of the youngest veterans – supports tolerance for differing perspectives. “We have seen that IAVA’s Post-9/11 veterans have opinions all across the spectrum on this issue,” its statement said. “Our members’ opinions, just like our members themselves, are very diverse. We hope all their voices are heard and respected as much as those of any professional athlete or politician.” | Stars and Stripes >>

“We think back ten years ago, after Pat was shot, he had critical traumatic brain injury, and we weren’t sure if he was going to survive. But, his drive, determination and positive attitude, have not only inspired his family and friends, but hundreds of supporters…as he trains once again for the Army Ten Miler,” said Fox. | WUSA >>

Sutton, 33, is part of a pilot program for combat veterans sponsored by DieHard RC, a local organization for people who race drones and radio-controlled cars. Sutton started last year. He was a novice, with no prior experience building or flying. So far, he’s the first and only beneficiary. His sponsors hope to expand.  | Herald Net >>

A hero veteran from Holbrook who lost both his legs in Iraq paid tribute to another hero in a special event this weekend. Chris Levi took part in the Tunnel to Towers Run. The New York City 5K covers the same path taken on Sept. 11 by Firefighter Stephen Siller, who raced with 60 lbs of gear on his back after the terror attacks, trying to get to the twin towers. Siller gave his life trying to save others. | News 12 Long Island >>