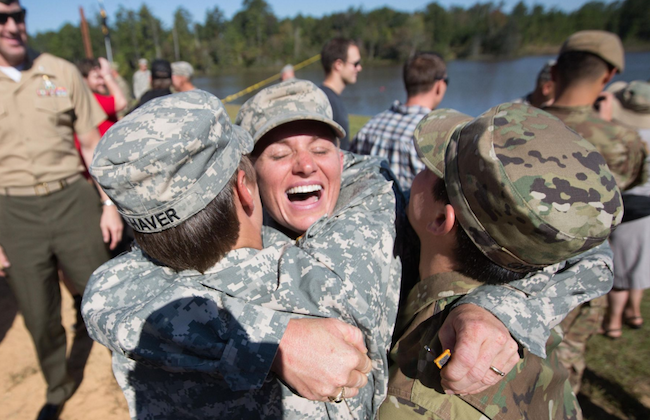 Congressman threatens to subpoena VA officials implicated in wrongdoing
The chairman of the House Committee on Veterans Affairs is threatening to subpoena VA senior executives at the center of a damning investigation into a questionable hiring scheme if they refuse to appear at a hearing Wednesday. | Stars and Stripes >>

Your Questions About Veteran Suicides
Since coming back from Afghanistan in 2008, the hard-hit Second Battalion, Seventh Marine Regiment has struggled to adjust. The battalion lost 20 men in war. In the years since, it has lost 13 more to suicide. The battalion now has a suicide rate 14 times that for all Americans. | New York Times >>

An American F-16 took fire over Afghanistan last Tuesday, forcing the pilot to make an unscheduled landing.The Pentagon did not disclose the incident until media reports emerged. | CNN >>

Afghanistan’s acting defense minister said on Monday that the Doctors Without Borders hospital in the north of the country that was bombed by U.S. forces was being used by insurgents who were fighting government forces. | CBS News >>

Germany, Turkey and Italy are set to keep their deployments in Afghanistan at current levels, senior NATO officials said on Monday after the U.S. government decided to prolong its 14-year-old military presence there. | Reuters >>

Iraq
The Iraq strikes were concentrated near Ramadi, Sinjar and Tal Afar, where they primarily destroyed fighting positions, vehicles and weaponry, according to the Combined Joint Task Force statement. | The Fiscal Times >>

Eve Ensler recently spoke with Yanar Mohammed about the impact of the U.S. military invasion and occupation of Iraq, the people’s uprisings in Tahrir Square, Baghdad, and the horrific violence, fear and trauma that Iraqi women face daily. | Huffington Post >>

U.S. and coalition military forces have continued to attack Islamic State of Iraq and the Levant terrorists in Syria and Iraq, Combined Joint Task Force Operation Inherent Resolve officials reported today. Officials reported details of the latest strikes, noting that assessments of results are based on initial reports. | Department of Defense >>

Less than three years after the United States Army sent home the last of its tanks that were permanently based in Europe, American commanders have been forced to rely on weapons shipped back temporarily or hardware borrowed from allies in the expanding effort to deter the latest threats from Russia with a fraction of the forces it had once deployed across the Continent. | New York Times >>

Looks like the U.S. armed forces have a few makers in their barracks who love playing with Raspberry Pis and soldering guns. The Army Cyber Institute at West Point has shown off a device the size of a rifle that can shoot a Parrot AR Quadcopter down from the sky by using an exploit created to hijack those particular drones. | Fortune >>

The situation confronting the Naples, Italy-based 6th Fleet isn’t pretty. Russian airplanes and warships are aggressively confronting U.S. and NATO forces after swallowing up a huge swath of eastern Ukraine a year ago. And Islamic State militants are spreading chaos into more regions of North Africa. These threats have the Navy’s commanders in Europe raising alarms. | Navy Times >>

A major crowdfunding site is trying to add to American Veterans Day traditions, launching a one-day nationwide fundraising drive for charities focused on people who have served. | Stars and Stripes >>

He often said they would die together. That if one went, the other would go soon after, that he would not make it without Mike. They had been to war and back twice. They were a team in Iraq and a team in the long war at home, facing a daunting return to civilian life. Both the man and the dog came back damaged, diagnosed with post-traumatic stress, and they were healing together. | Washington Post >>

Peter Nardolillo of Colonie benefited so much from participating in SongwritingWith:Soldiers, a retreat program that pairs veterans and active duty service members with professional songwriters to create songs about their combat experiences, he’s going to help fellow veterans during a retreat. | Albany Times Union >>
Inside Washington

Veterans are becoming dismayed by miscommunications about separation pay — which is essentially military severance pay — and receiving benefits later in life. Stephen, a former Marine Corps staff sergeant who told Military Times he would like to be mentioned only by his first name, recently qualified for 80% VA disability, but will not be paid because he accepted $80,000 in separation pay when the military began making personnel cuts. | Task & Purpose >>

USA TODAY discovered the 41,500 vacancies as of late June in data obtained through a Freedom of Information Act request. The full- and part-time positions include openings for 5,191 physicians, nearly 12,000 nurses and 1,262 psychologists, according to the data. Four locations were short at least 100 doctors: Orlando, Portland, Ore., Baltimore and Salt Lake City. | The Herald Independent >>