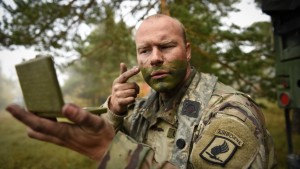 But a White House official said Shulkin did not have an interview and “was never under consideration for the position.” The official, who insisted on anonymity because the official was not authorized to speak on the record about a personnel matter, declined to discuss reasons behind who was being considered and why. | Stars and Stripes >>

The Department of Veterans Affairs said Tuesday it would proceed with a narrow waiver to an ethics law banning VA employees from receiving benefits from for-profit colleges, saying most cases posed no actual conflicts of interest with private companies vying for millions in GI Bill tuition. | Sacramento Bee >>

VA said its measure would also shore up VA facilities by improving buildings and boosting staffing levels where large numbers of vacancies persist. Secretary David Shulkin said earlier this year department has 49,000 unfilled positions, but the number has since decreased. | Gov Exec >>

Pakistan is betting that a pair of nine-foot chicken wire fences topped with barbed wire will stop incursions by Islamist militants from Afghanistan, which opposes Islamabad’s plans for a barrier along the disputed frontier. Pakistan plans to fence up most of the 2,500 km (1,500 mile) frontier despite Kabul’s protests that the barrier would divide families and friends along the Pashtun tribal belt straddling the colonial-era Durand line drawn up by the British in 1893. |  US News and World Report >>

The drop follows reports of production disruptions as major oil fields changed from Kurdish to central government control on Monday and Tuesday. Crude oil shipments through the Iraq-Turkey Pipeline have fallen to one-third of their usual volumes, shipping sources told Platts. Total exports through the line were at 190,000 barrels a day, the source said. Reuters earlier reported flows had slowed to 225,000 barrels a day. | CNBC >>

The Taliban unleashed a wave of attacks across Afghanistan on Tuesday, targeting police compounds and government facilities with suicide bombers in the country’s south, east and west, and killing at least 74 people, officials said. Among those killed in one of the attacks was a provincial police chief. Scores were also wounded, both policemen and civilians. | USA TODAY >>

The grainy images were a breakthrough. Military planners mobilized members of the Navy’s SEAL Team 6, an elite group of commandos, to mount a rescue, according to senior American officials. But the operation was called off amid concerns, and days later, the C.I.A. watched in alarm as militants drove the family out of the camp and across Pakistan’s lawless tribal lands. | The New York Times >>

Headquartered in Yokosuka, Japan and responsible for the defense of South Korea, the U.S. Navy’s 7th Fleet has been beset by problems this year. The most serious incidents occurred over the summer when two destroyers, the USS Fitzgerald and USS John S. McCain, were involved in separate deadly collisions with heavy loss of life. Those events raised serious concerns about the safety and readiness of U.S. warships in the Pacific, as well as morale throughout the Navy in general. | Forbes >>

The families of dozens of U.S. troops killed or injured during the war in Iraq filed a federal lawsuit Tuesday against several U.S. and European pharmaceutical and medical supply companies, alleging that the corporations knowingly financed the anti-American militia Mahdi Army through bribes and kickbacks to officials at a government ministry controlled by the group. | USA TODAY >>

Bunny, 35, is an East Amherst native who is a graduate of Syracuse University and Army Officer Candidate School. Following Ranger and Airborne schools, he was a platoon leader in the 10th Mountain Division at Fort Drum and in Iraq in 2009, leaving the Army as a captain. He then graduated from the University at Buffalo School of Law and joined the District Attorney’s Office before recently leaving to run for Congress. | Buffalo News >>

“The doctors could’ve worked on rebuilding my heel bone, but it would have never been perfect,” recalls Jukes, who grew up hiking, mountain biking, and climbing. “They were saying that I would probably never be able to run, and that I would be on pain medications for the rest of my life.” | Sierra Club >>

Students look left and right for a break in traffic to make their quick jog across the busy road at the stoplight between Edgar and Garden. Cory Krassinger, however, waits patiently for the walk sign to appear, then makes his way across. Krassinger is a veteran and describes this everyday occurrence as one example of the disorganization that comes with college life. | Webster Journal >>