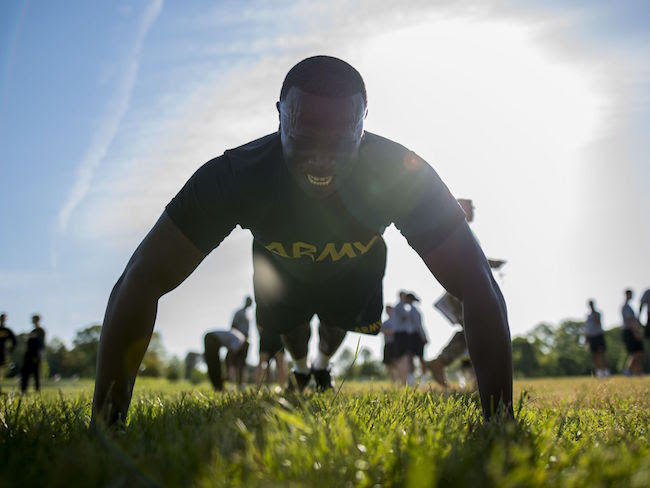 “We’ve found an entire ecosystem of junk news about national security issues that is deliberately crafted for U.S. veterans and active military personnel,” said Philip Howard, a professor of internet studies who led the research. “It’s a complex blend of content with a Russian view of the world — wild rumors and conspiracies.” | Military.com >>

The cost of transgender health care is in the spotlight, both for veterans, and for active duty transgender troops.  The U.S. Department of Veterans Affairs announced shortly after President Donald Trump was elected that it was going to drop plans to cover those surgeries in part because of cost. Then, President Trump directed the Department of Defense to stop providing transition-related care for active duty service members in part citing “tremendous medical costs.” | Marketplace >>

In a notice of intent published in the Federal Register last month, the department said employees would still have to abide by conflict of interest laws, but that current regulations, which VA is now trying to roll back, have “illogical and unintended consequences.” Interpreted literally, the rules could lead to the firing of a VA lab technician who takes a class at a for-profit institution, according to VA. | Military Times >>

Islamic State leader Abu Bakr al-Baghdadi released an audio recording two weeks ago that indicated he was alive, after several reports he had been killed. He urged his followers to keep up the fight despite setbacks in Iraq and Syria. “Approximately 1,000 men surrendered over the last week. Not all, however, are terrorists,” said the security official in Erbil, the northern Iraqi base of the autonomous Kurdistan Regional Government. | Reuters >>

In August, Trump announced a new approach for the U.S. war in Afghanistan. Acknowledging that his “original instinct was to pull out” of Afghanistan, Trump said that after becoming president he realized a hasty withdrawal would cede ground to terror groups. | NBC News >>

“The bodies of two of the crew killed in the crash of their Cessna Caravan in Hawija in March 2016 have been found,” the air force said. “The jihadists had hidden the bodies of Brigadier General Ali al-Ubudi and Major Mohammed al-Shikhli,” it said, adding that a search was under way for the body of the third crew member, Colonel Mohammed Abdel Kassar. | YAHOO >>

Opioid use among active-duty soldiers dropped more than 3 percentage points from 2012 to 2016, according to the Army surgeon general, thanks in part to the Army’s efforts to find alternate methods of pain management. “This addiction problem recognizes no distinction between those who wear the uniform and those who don’t,” said Lt. Gen. Nadja West, speaking at a family forum during the Association of the U.S. Army’s annual conference in Washington, D.C. | Military Times >>

Defense Secretary Jim Mattis told the annual convention of the Association of the US Army on Monday that they should “be ready” with military options should diplomacy fail with North Korea. When asked what the US military could do to make war with North Korea less likely, Mattis didn’t sugarcoat it or offer false hope. | Task and Purpose >>

“It was terrible – tasted so bad that nobody would use it,” said Gregory Sumerlin, senior director of Government & Military Accounts for DripDrop ORS (Oral Rehydration Solutions). Enter DripDrop, with packets of lemon-, cherry- and watermelon-flavored powders that were on display Tuesday at the Association of the U.S. Army’s annual convention in Washington. | Military.com >>

“We help our clients find and design the printed materials that let them stand out in an information saturated world,” says Keith, who has jumped right into the business and is excited to serve his customers. He continues, “We help pick the right stock to complement the customer’s imagery and produce high quality prints, then finish the product in ways to ensure the reader is engaged. We succeed only by helping other businesses and non-profits succeed.” | Globe Newswire >>

He trained in military intelligence and was deployed to Korea for two years, from 2010 to 2012. In early 2012, he was transferred to Germany and, three months later, he was deployed to Forward Operating Base Shank, located in Logar province in eastern Afghanistan. On Sept. 22, 2012, while he was working in an office in the headquarters building, a 107mm rocket hit the roof and exploded, sending shrapnel everywhere. A piece hit Kotouc and severed his spine. | The Daily Nonpareil >>

“I just ran into him, and he said give him a call and now I have my own home,” Raymond Crook said, describing how he met Robert “Rob” Stevens, a real estate agent with ERA Liberty Real Estate in Martinsburg. “We formed a bond. We both have PTSD. He understands trust issues.” | The Journal >>