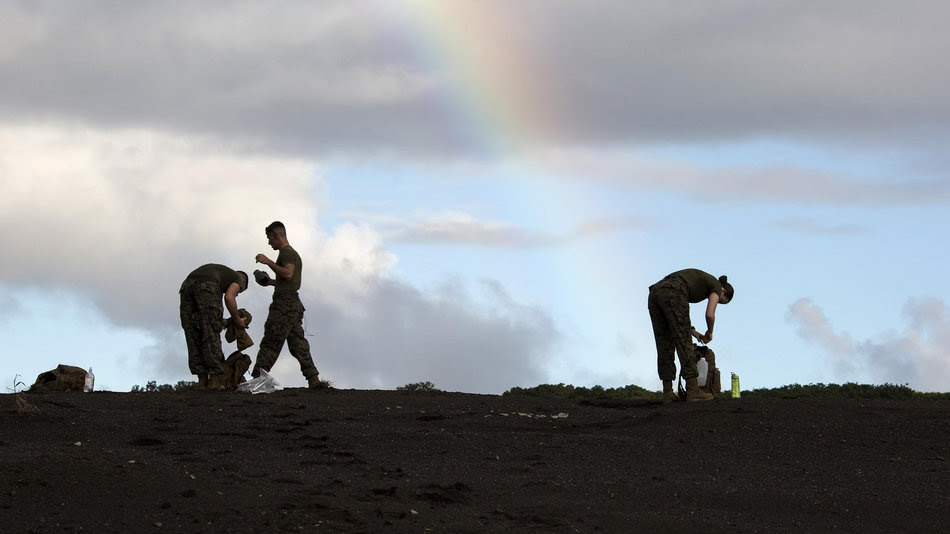 In the 241 years since our nation’s founding, countless American heroes have raised their right hands and sworn an oath to support and defend our Constitution and a set of principals all Americans regard to be self-evident: “that all people are created equal, that they are endowed by their Creator with certain unalienable rights, that among these are Life, Liberty, and the Pursuit of Happiness.” | The Hill >>

These rising suicide numbers are one tragic result of inadequate mental health services. Many veterans, both men and women, experience mental health issues upon returning from service. Post-traumatic stress disorder-which impacts an estimated 20% of all veterans-is the number one complaint among women treated at VA facilities. Depression and hypertension rank closely behind. | Fortune >>

The quake sent boulders tumbling down the surrounding hills, blocking roads to nearby villages and flattening cars. Several landed outside a control room where Abdullah Karim, 48, was monitoring images from the dam’s closed-circuit cameras before walls crumbled, furniture crashed to the floor and he sprinted for the door. | The Los Angeles Times >>

Afghanistan’s opium production has almost doubled this year compared to 2016, while areas that are under poppy cultivation rose by 63 percent, according to a new joint survey released Wednesday by the United Nations and the Afghan government. | CBS News >>

More than 3 million people displaced by Islamic State-related violence in the last three years have still not returned home. A rift between the central government in Baghdad and the Kurds following a September referendum on independence has created a fresh wave of displacement. | U.S. News and World Report >>

In announcing the ban in July, Mr. Trump posted on Twitter that United States forces could not afford the “tremendous medical costs and disruption” of transgender service members. He said he had consulted with generals and military experts, but Jim Mattis, the defense secretary, was given only a day’s notice of the decision. | The New York Times >>

“We’re burning out our people,” Wilson said. “Surge has become the new normal in the United States Air Force. You can do that for a year, or two years, maybe even three or four years. But I met someone last week who has just come back from his 17th deployment. Seventeen deployments. And at some point, families make a decision that they just can’t keep doing this at this pace.” | Newsweek >>

On Nov. 13, U.S. Army Col. Robert Manning, a spokesperson for the Pentagon, told reporters that more than 40 al-Shabab and ISIS fighters have been killed in the series of strikes. The U.S. appears to be ramping up operations in the war-torn region as African Union forces in Somalia, or AMISOM, begin a steady withdrawal of forces from the region as a result of UN mandated force caps. | Military Times >>

Veterans are strong, independent leaders who can handle a lot of difficult situations. It’s not charity, it’s a smart investment in their future — and in America’s. Veterans’ dedication and tenacity represent the very best of the American spirit and ingenuity. In tough times, you need tough people. | Entrepreneur >>

As a balm to soothe the tired soul, veterans often look to nature for catharsis. “Farms have been a place of refuge for centuries for soldiers coming home from war. It’s an old tradition that goes back to Biblical times,” says Michael O’Gorman, founder of the Farmer Veteran Coalition, a nonprofit organization that helps veterans transition to farming. | KCET >>

Representatives from the Vet Center, which provides readjustment counseling for combat veterans, military sexual trauma counseling and bereavement counseling also attended. Students may have caught a glimpse of the large white “Vet Mobile,” the Vet Center’s mobile command center, parked along the north entrance of the Student Union. | UMKC >>