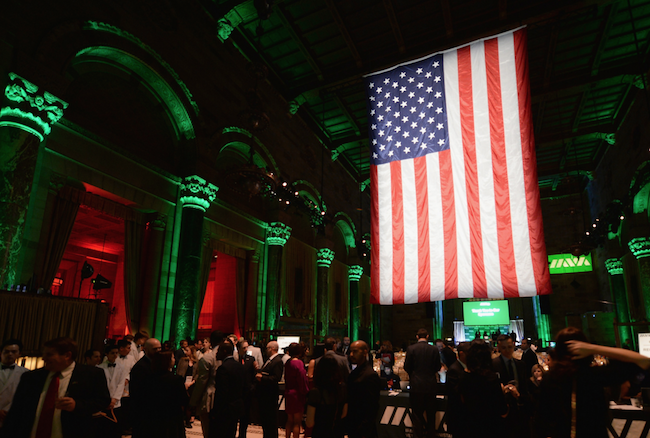 Veteran suicide: the stories behind the statistics
As the nation pauses to remember its veterans, Yahoo News and Finance Anchor Bianna Golodryga examines the toll the wars in Iraq and Afghanistan have taken on the men and women who have served there. | Yahoo News >>

Obama using Veterans Day to prod Congress
President Obama will use his Veterans Day platform to push Congress for a broad slate of new legislation and reforms, including plans to squeeze for-profit colleges’ ability to accept GI Bill benefits. The commander in chief is also touting progress and reforms at the Department of Veterans Affairs at a time when public confidence in the agency is still shaky, and lawmakers’ criticism of operations continues to rise. | Military Times >>

Through a persistent rain in the Afghan capital on Wednesday, thousands of protesters carried the coffins of seven beheaded Hazara hostages to the presidential palace, demanding greater security and an end to a wave of targeted violence. | New York Times >>

The United Nations Assistance Mission in Afghanistan (UNAMA) today condemned the murder by anti-Government elements of seven civilians, including two women, one girl and two boys, in the southern province of Zabul. | UN News Centre >>

On Thursday, Groberg, 32, will receive the Medal of Honor at a White House ceremony for actions in Afghanistan in 2012 that are credited with saving multiple lives. Groberg, who medically retired from the Army in July after seven years of service, will become the 10th living service member to receive the honor for actions of valor in Afghanistan. | Washington Post >>

The United States and its allies conducted 11 strikes against Islamic State in Syria and 17 in Iraq on Tuesday, the coalition leading the operations said. | Reuters >>

Iraqi forces appear better positioned than ever to launch an offensive against Islamic State militants controlling Ramadi, now that months-long efforts to cut off supply lines to the city are having an effect, but plenty of risks remain. | Reuters >>

A Gold Star dad brought the iconic “Hell House” image from the Battle of Fallujah to life by casting a new bronze statue that now sits outside the site where some of the Marine Corps’ most severely wounded warriors receive their care. | Marine Corps Times >>

That highly abbreviated biography of the eighth sergeant major of the Marine Corps would get the attention of any Marine. But official service anecdotes credit him with popularizing “oorah” in the Marine lexicon — and that alone has cemented him into leatherneck lore. | Marine Corps Times >>

Top media and advertising personnel will gather to support the Iraq and Afghanistan Veterans of America, which is holding its 9th Annual Heroes Gala in New York Thursday, the day after veterans day. IAVA aims to support post-9/11 veterans by creating empowerment, advocacy and awareness and providing employment opportunities. | Broadcasting & Cable >>

Just days before completing his tenure, Army Secretary John McHugh defended the Army’s decision to open Ranger School and outlined data that showed female candidates performed just as well – and in some cases better than – their male peers. Mchugh was responding to allegations the service eased the standards for the first women to complete the famously grueling course. | Army Times >>

Former Army Capt. Scott Bostic’s story could start with his upbringing in the Methodist church in Roswell, Georgia, or at the U.S. Military Academy at West Point, where he made a priority of always finding time for devotion. But to understand how this former medical corps officer ended up in divinity school, it may make more sense to start in Iraq. | Military Times >>

Keith Totten kept a fast pace during his Veterans Day mission to bring attention to the problem of post-traumatic stress disorder among military veterans. Once or twice a month since April the 39-year-old Umatilla resident laces up his boots and sets out on a new mission. Dressed in desert fatigues and toting 100 pounds in a backpack, Totten embarks on a road march while carrying a large American flag. | Orlando Sentinel >>

If all goes according to plan, Chris Ring, a 28-year-old Navy combat veteran, will become the first American to swim the length of the Mississippi River when he reaches the Gulf of Mexico early next month. But for Ring, the achievement would be secondary to his larger goal: To raise awareness of so-called Gold Star Families, the designation given to loved ones of soldiers killed in combat. | Fox News >>

They want to give veterans of Iraq and Afghanistan a place where they can reflect on war’s wounds — seen and unseen — reunite with battle buddies; it would be a physical testament to their legacy. Veterans from wars’ past along with troops in the current conflicts are coming together to begin an effort to honor the 2.5 million troops who have been to the war zones since 2001. | Military Times >>

On the eve of Veterans Day, the Republican presidential candidates spent their fourth national debate focused not on the impact of past wars but instead on potential future military conflicts. | Military Times >>

Bernie Sanders marked Veterans Day on Wednesday here by arguing that “patriotism or love of country” mean both protecting soldiers at war and veterans when they come home. Sanders, the independent Vermont senator and Democratic presidential candidate, hopped over the state border to Lebanon to march in the town’s Veterans Day parade and give a brief speech to the roughly 100 people assembled in the town’s central park. | CNN >>