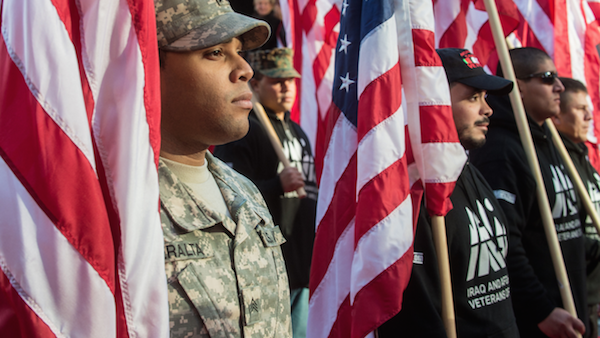 Dig into discounts and deals on Veterans Day
From free meals to discounts on propane deliveries, countless local and national businesses are offering discounts to military personnel and veterans on Veterans Day. Following are just a few available. Keep an eye out in your local community for information about others. Check back here to see if there are additions. | Military Times >>

Senate approves VA funding for fiscal 2016
Senate lawmakers advanced plans for a $166 billion Veterans Affairs Department budget for fiscal 2016, a potential next step not only for veterans program funding but also a broader budget deal for all federal spending. | Military Times >>

The Taliban victory in Kunduz and their significant territorial gains this year have shocked many in Afghanistan. Fourteen years after a U.S.-led invasion supplanted the Taliban, and after many billions of dollars of American investment, a painful question is asserting itself: Is Afghanistan falling apart? | NPR >>

A protest convoy drove the bodies of seven members of Afghanistan’s minority Hazara community to the capital Kabul on Tuesday to protest against their murder by unknown militants, who dumped their partially beheaded bodies at the weekend. | Reuters >>

Afghanistan’s spy agency freed eight people who were among a large group of ethnic minority Hazaras kidnapped earlier this year, the agency said on Tuesday. The five men, two women and a teenager were freed Tuesday in Ghazni province, the National Directorate of Security said in a statement. | Associated Press >>

A U.S.-led coalition conducted 15 strikes against the Islamic State in Syria on Monday, hitting the militant group with bomber, fighter, attack and drone aircraft, the U.S. military said on Tuesday. | Reuters >>

Officials say attacks in different parts of the Iraqi capital have killed at least 10 civilians. A police officer says a bomb went off Tuesday morning in an outdoor market in Baghdad’s northern Sabi al-Bore neighborhood, killing three shoppers and wounding eight others. Another police officer said three more civilians were killed and seven wounded in a bomb explosion in the eastern suburb of Hussainiyah. | Associated Press >>

Facing resistance from within his own party, Iraqi Prime Minister Haider al-Abadi is struggling to sustain support for a political shake-up he says is critical to efforts to counter Islamic State militants. | Reuters >>

Secretary of the Navy Ray Mabus announced that SSN 798, a Virginia-class attack submarine, will bear the name USS Massachusetts during a taped video message at Gillette Stadium. The submarine will be named to honor the history its namesake state has with the Navy. | Navy News >>

Secretary of State John Kerry spent the Marine Corps’ 240th birthday aboard a ship where he paid tribute to the strong bond between the State Department and the Marines who stand guard at diplomatic posts worldwide. About 100 Marines were aboard the the amphibious transport dock San Antonio when Kerry made his stop at Naval Station Norfolk, Virginia. | Marine Corps Times >>

Iraq War veteran Joe Leal knows firsthand the difficulties associated with readjusting to domestic life after combat. “You hear this, ‘We support the troops,’ and there’s commercials out there where troops will be walking down the airport and people will clap, like, ‘Thank you for your service,’” Leal says. “But what happens after they take the uniform off?” | The Daily Signal >>

A veteran in Lacey, Washington is trying to turn his passion for a great cup of coffee into a successful business that not only takes care of his family, but other families, too. By now, a new challenge shouldn’t faze Alex Wilson. As a member of the U.S. Army Special Forces, he took on some of the toughest military assignments. | KING 5 News >>

We already know that women business owners are driving the growth in small business, and that within that group, it’s women of color who are making the most progress. But if slice the data slightly differently, and you’ll find an unexpected trend: The group of business owners that really putting stakes in the ground are women veterans. That’s right — women who have served in the armed forces, and now are returning to civilian life to build businesses and jobs. | Inc. >>

A defense bill expected to be approved by the Senate Tuesday would eliminate the Pentagon office in charge of stopping roadside bombs that have been the No. 1 killer of U.S. troops in Iraq and Afghanistan. | The Hill >>

Democratic presidential candidate Hillary Clinton on Tuesday will announce a series of proposals to help military veterans, including an overhaul of the backlogged VA health care system. “Secretary Clinton believes that supporting our veterans is a sacred responsibility,” Clinton’s campaign said in a statement the day before the Veterans Day holiday. | Huffington Post >>