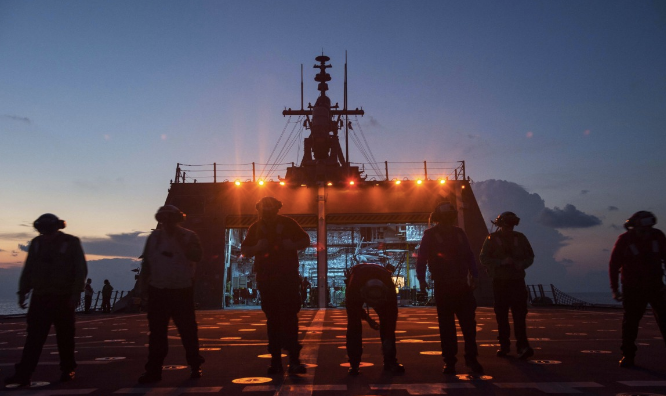 “This is not fear mongering, this is not hyperbole,” Rep. Mark Takano, D-Calif., and a member of the House Veterans’ Affairs Committee, said before the vote. “This bill jeopardizes health care for up to seven million veterans, and everyone should oppose it.” | Military Times >>

“It seems to me – whether intended or not, or whether it was a bureaucratic snafu – to be a bait and switch,” DeSaulnier said. “There is a promise between the American public, the American taxpayer, and military service members, when they go in, when they serve and when they get out, they’ll have this support, and in my view, the federal government and the Congress are violating this contractual obligation.” | Task and Purpose >>

“There is a general understanding on both sides that it would be in the long-term interests of each to have that continued presence. So as for agreement, yes, we both understand it would be mutually beneficial. That we agree on,” the U.S. official said. Both officials spoke on condition of anonymity in line with regulations. | Bloomberg >>

There are about 8,400 US troops in Afghanistan. The majority of those forces are involved in training and advising Afghan troops. About 2,000 US servicemembers participate in a counterterrorism mission aimed at targeting groups like al Qaeda and ISIS. US troops have been present for nearly 16 years in Afghanistan, where the government backed by its coalition allies are battling a resilient Taliban as well as other terror groups including ISIS. | CNN >>

“In early 2016, the posture of our force, the authority granted to our units, the capabilities of Iraqi security forces, and the effectiveness of ISIS were all very different versus January [2017],” said Col. Brett Sylvia, the brigade commander. The brigade, stationed at Fort Campbell, Kentucky, deployed about 1,300 soldiers to Iraq from April 2016 to January 2017 in support of Operation Inherent Resolve. | Military Times >>

The U.S. Army is authorizing $5,000 bonuses to woo top-performing troops into a new training brigade as the service once famous for shouldering the burden of America’s wars works to meet the growing demand for advisers in places ranging from Iraq and Syria to Afghanistan and Africa.  | Stars and Stripes >>

The Marine Corps’ recruit hazing scandal is not limited to the Corps’ East Coast training depot at Parris Island, South Carolina. At least two drill instructors at Marine Corps Recruit Depot San Diego have been disciplined since 2014 for hazing recruits, according to redacted copies of the investigations, which Marine Corps Times obtained through the Freedom of Information Act. | Marine Corps Times >>

“It probably was someone who wasn’t a bad person,” the 35-year-old said this week at his Sturbridge home. “And I don’t hate them for it.” When he reflects on the day his life changed forever, Mr. Hall’s eyes moisten. He speaks with a quiet intensity that belies the fire in his blood. The son of a daredevil, he has passion for motocross, and no improvised explosive device could change that. | The Telegram and Gazette >>

For Shumaker, who is now a veterans service officer for Olmsted County, it’s just one of the many ways women were treated differently in the military, even as they took on the same roles as their male counterparts. Having served two active-duty tours – one in Afghanistan and one as support in the United States – she said she’s seen women serve their country with distinction.  | The Post Bulletin >>

“I tell people all the time it’s really odd for me to say it out loud but losing my legs was the best thing to happen to me,” Dan said. It’s certainly a profound statement to say life improved after being wounded in war, but Dan sticks by that. He says it was yoga that transformed his life, and he would like to see other service members transformed by it too. | News 4 Jax >>