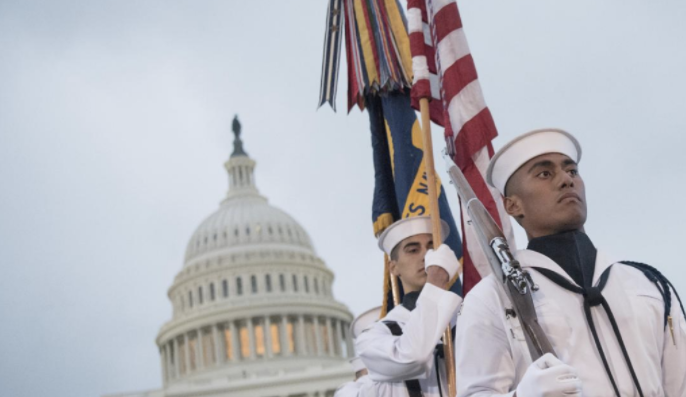 President Donald Trump is proposing more money for the Department of Veterans Affairs, but veterans groups and lawmakers are lining up against some of the administration’s priorities, especially cuts in payments to disabled veterans who are unable to work and increases for an outside care program that has yet to be formulated. | The Wall Street Journal >>

The numbers are an increase from a similar period in the previous year. The VA has pledged “zero tolerance” in drug thefts following an AP story in February about a sharp rise in reported cases of stolen or missing drugs at the VA since 2009. Doctors, nurses or pharmacy staff in the VA’s network of more than 160 medical centers and 1,000 clinics are suspected of siphoning away controlled substances for their own use or street sale – sometimes to the harm of patients – or drugs simply vanished without explanation. | Military Times >>

An explosion early Tuesday at an ice cream parlor in Baghdad shared many of the same heart-wrenching characteristics of last week’s attack at a stadium in Manchester, England. And that was just the start of the violence on Tuesday, in a city where these kinds of terrorist attacks have been notably more frequent this year. | The New York Times >>

“This [legislation] would be essentially telling the entire region, as well as terrorists and insurgents, that the Afghan government has no practical chance at surviving,” Cordesman told the Washington Free Beacon. “What would happen is the entire modern sector of the economy, which is heavily dependent on outside aid, would collapse. You’re not talking about the country breaking up, you’re talking about the country imploding.” | The Washington Free Beacon >>

The Iraqi government has delayed a decision on whether to renew  a contract with an Italian engineering firm managed by the Corps of Engineers when it expires after this year. It may try to make the critical repairs itself to save money at a time when it is feeling a cash squeeze because of the cost of the war to expel the Islamic State from the country. | USA Today >>

With training for the first of six new so-called Security Force Assistance Brigades (SFABs) set to begin this fall, the U.S. Army is offering several perks, including a $5,000 bonus, to recruit seasoned soldiers for the assignment, Army Times reports. | Task and Purpose >>

Overall, Americans like all five branches of the military. However, the Air Force is the most important branch among 27 percent of Americans, while 21 percent say the Army is most important, according to the Gallup poll. The Air Force was also found to be the most important in both 2001 and 2002, four months before 9/11 and shortly after the war in Afghanistan began.  | Military Times >>

The Army’s Criminal Investigation Command (CID) since 2011 has been investigating soldiers who participated in the National Guard Recruiting Assistance Program, or G-RAP. It created a new cadre of recruiting assistants who received up to $2,000 for each recruit they helped sign up to meet a soldier shortfall during two wars. | The Washington Times >>

Marcus Knipe never needed the basic medical training he received while serving in Iraq. But he needed it Friday when he helped save a young man who suffered a slashed neck in the deadly attack on a MAX train in Northeast Portland. | Oregon Live >>

Jason Simmons, 37, served eight years in the Marine Corps, much of it in counter intelligence and human intelligence. His first real-world encounter was the October 2000 bombing of the USS Cole in Aden, the terrorist attack that killed 17 U.S. sailors. “She was still sitting there, gaping hole in the side,” he recounted as one of the first security teams to arrive at the Cole to set up the initial security perimeter.  | KVUE >>

It was all rods, screws and some bone that didn’t grow back right… It looked like a leg, but it wasn’t a leg,” he said. Dr. Matthew Carty amputated Korona’s leg in a six-hour operation at Brigham and Women’s Faulkner Hospital in Boston. He used a new procedure that could reinvent the science of amputations. | CBS News >>