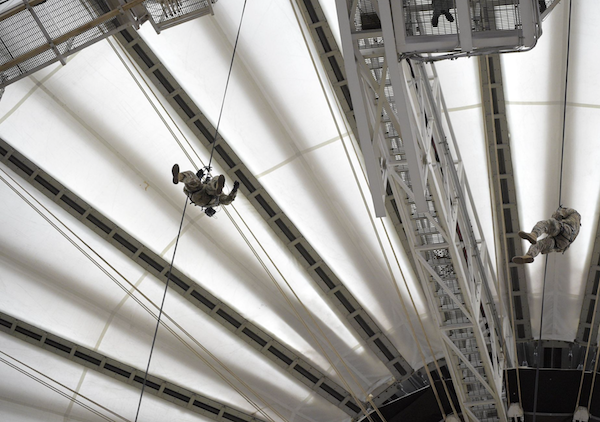 Soldiers from the U.S. Special Operations Command repel from the roof of Tropicana Field to deliver the baseball used in the ceremonial first pitch before a baseball game between the Tampa Bay Rays and the Toronto Blue Jays in St. Petersburg, Fla., on May 1. Phelan M. Ebenhack/AP | Military Times >>

New Labor Department employment portal targets veterans
Veterans.gov, a product of Labor’s Veterans’ Employment and Training Service, aims to unite many agencies’ and states’ resources into a central clearinghouse serving both veterans and the businesses that wish to employ them. | FCW >>

Study: Veterans waiting to seek care may be slowing VA system
Nearly three of every ten veterans report they have delayed seeking medical care, which researchers suggest may be slowing down the U.S. Department of Veterans Affairs’ ability to serve them. | UPI >>

Security forces have been instructed to respond strongly to Pakistani incursions along the country’s eastern border, an Afghan defense official said Monday in the wake of reports that Pakistan’s military had fired dozens of rockets into eastern Nangarhar province last week. | Stars and Stripes >>

Afghanistan’s president is expected to soon sign the execution orders for prisoners who have been convicted on terrorism-related charges. | Voice of America >>

At the tender age of 32, he is Afghanistan’s new ambassador to the United States, representing a country where 75 percent of the population is younger than 35 — and has never known a day of peace. And is sick of it. | The Washington Post >>

Carrying the tents, pillows and blankets they had brought for what many expected to be a longer sit-in, supporters of Shiite cleric Moqtada al-Sadr streamed out of Baghdad’s fortified Green Zone on Sunday, a day after they had broken in, ransacking parliament and demanding reform. | The Washington Post >>

A car bomb has killed at least 13 Shi’ite pilgrims in Baghdad on the anniversary of the death of a revered 8th century religious leader. | Voice of America >>

From a sandbagged hilltop outpost in Wadi Mashar, Iraq, you can see the front line of the Islamic State group in the muddy brown houses of Al-Nasr, a village on the next ridgeline, about a mile and a half west. The Iraqi army was supposed to have captured this target a month ago. But the offensive was repelled. | Stars and Stripes >>

The U.S. Navy has formally begun construction on its newest Virginia-class submarine, as Jill Biden, wife of Vice President Joe Biden and the sub’s sponsor, hosted the keel laying ceremony for the USS Delaware in Newport News, Virginia. | CNN >>

While most agree Marines are some of the most resilient men and women in America, the daily strains of their jobs can take a toll on their mental well-being. Being away from their loved ones for months to years at a time, seeing combat and feeling the pressure of the image of strength they’re sometimes expected to portray affects them. | Military.com >>

Sailors and pilots with the USS Harry S. Truman Carrier Strike Group will have to wait a little longer to be reunited with their loved ones. The Navy announced Friday they have extended the deployment by 30 days as they ramp up their fight against ISIS in the Arabian Gulf. | WAVY >>

“We identified too many veterans suffering from PTSD and addictions who were going untreated and not doing well in traditional shelters,” Chris Stout, president of Veterans Community Project, said in a news release. “We decided as vets that we had to do something to help.” | The Kansas City Star >>

The USX team — Jukes, Medvigy and Earls — will be climbing the north side of Everest. The route is somewhat less scenic than the more popular south side, but it comes with the bonus of fewer crowds. | CNN >>

Like many of the people gathered in a room at the William Jack Hernandez Sport Fish Hatchery Sunday morning, Todd Green used to know nothing about fly fishing. But before the end of the day, the Army veteran was tying a new fly with ease. | KTVA >>

The House Armed Services Committee’s defense policy bill, passed April 28, tees up clashes with the Senate and the Pentagon, chiefly over a plan altering the use of the wartime overseas contingency operations (OCO) account. | Defense News >>

The Pentagon has no plans to heighten security or move U.S. troops in Baghdad after protesters loyal to Shiite Muslim leader Muqtada al-Sadr breached the Green Zone over the weekend to demand political reform, Capt. Jeff Davis said Monday. | Stars and Stripes >>