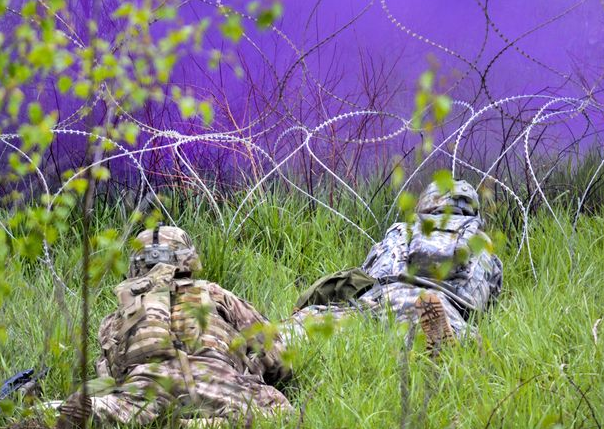 Soldiers assess a concertina wire obstacle under the cover of smoke and prepare to breach it using a bangalore torpedo during their Gunnery Table XII at Grafenwoehr Training Area, Germany, on May 19. Maj. Randy Ready/Army | Military Times >>

Five years ago, Memorial Day 2011 was the first Memorial Day in 26 years without my Godson and cousin, SGT Steven DeLuzio on this earth. We didn’t spend every Memorial Day together, but I never had to question whether I would see him again. | Huffington Post >>

As 2nd Lt. Alix Schoelcher Idrache stood at attention during the commencement ceremony at West Point, N.Y., on Saturday, he was overcome with emotion. Tears rolled down both cheeks, but his gloved left hand held firm on his white, gold and black “cover,” the dress headgear that Army cadets wear. | The Washington Post >>

Residents fleeing the fierce fighting between Iraqi forces and Islamic State (IS) militants in Fallujah are in a “state of shock”, reeling from the gunfire and months of near-starvation. | Voice of America >>

The new Afghan Taliban leader has told commanders and the group’s supreme leadership council that there will be no peace talks with the Afghan government, a source in the group reached through an intermediary said Wednesday. | CNN >>

Iraq has honored a police officer who stopped a would-be suicide bomber at a checkpoint in a northern Baghdad neighborhood this week. Saad Ali Thabit’s brave act was caught on a closed-circuit camera on Wednesday in the Kadhimiyah neighborhood and has since gone viral. | Associated Press >>

The Navy said the Super Hornets crashed about 27 miles off Cape Hatteras about 10:30 a.m. A commercial fishing vessel recovered all four survivors, who were flown to Sentara Norfolk General Hospital by a Coast Guard helicopter, according to the Coast Guard. The hospital is the area’s only Level I Trauma Center. The extent of injuries is unknown. | The Virginian Pilot >>

A chemical, biological, radiological and nuclear defense team from the 11th Marine Expeditionary Unit took up specialized training last month in the middle of the Nevada desert to learn how to respond to a “radiological event.” | Marine Corps Times >>

The Navy is investigating a discrepancy about the number of medals “American Sniper” Navy SEAL Chris Kyle claimed he was awarded for heroism, officials said Wednesday. | USA Today >>

Before entering West Point, I had no idea what Memorial Day or Veterans Day was really all about. It was not until I experienced life on deployment did I truly understand what both represent. Now, as an educator, I feel it is my responsibility to make sure that my students do not leave high school without understanding the meaning of these two important days. | PBS >>

Salahuddin is neither a sitting congressman nor a senator – he’s a 25-year Army veteran who is part of the Vet Voice fellowship program that aims to let post-9/11 service members lend their military experience to elected officials on the Hill. | Roll Call >>

“I wasn’t doing it for any reason, besides to help him, to give him a quality of life, to give his daughters a father and give his wife the husband that they all deserve,” Coughlan said. | Fox59 >>