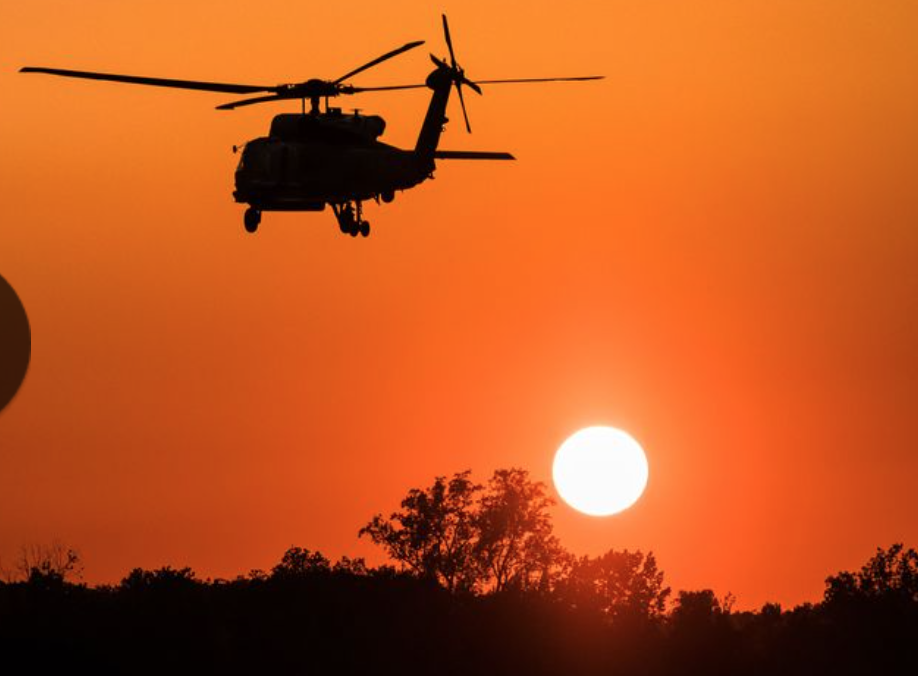 A military helicopter flies along the Potomac River tree line past the setting sun near the Georgetown neighborhood of Washington on May 19. J. David Ake/AP | Military Times >>

Does PTSD affect your ability to get life insurance?
An Army veteran and his wife said they were “shocked and saddened” when they learned he was denied life insurance because of his history of post-traumatic stress and depression. “There have to be a lot of veterans with this diagnosis,” said the wife, who asked to remain anonymous as they continue the process of getting insurance through another company that specializes in life insurance for service members and veterans. | Military Times >>

President Barack Obama said Monday that the violent death of Taliban leader Mullah Mohammed Akhtar Mansour by a U.S. airstrike should send a “clear signal” to anti-American extremists that “we’re going to protect our people.” | AP >>

Senior Afghan Taliban figures met on Monday to agree on a successor to Mullah Akhtar Mansour, the leader of the militant movement who U.S. President Barack Obama confirmed had been killed in an American air strike at the weekend. | Reuters >>

The Iraqi government said the long-awaited battle to recapture the city of Fallujah began in the early hours of Monday. Video published online overnight purportedly shows heavy bombardment of the city before the advance of ground troops. | CBS News >>

Photographer Ali Arkady started his dangerous journey to Baghdad, Iraq, in July. He had one goal: spend close to a year with a group of Iraq’s orphans, a story he wanted the world to hear about. Thousands of children have lost their parents in Iraq’s recent bloody past, but many of them are cared for by extended family. | CNN >>

The U.S. military launched airstrikes and advised Iraqi government forces in their push to recapture the city of Fallujah from Islamic State fighters Monday, a U.S. military spokesman based in Baghdad confirmed to Fox News. Government forces pushed ISIS militants from some agricultural areas outside the city Monday, Iraqi officials said. | Fox News >>

Two long-range U.S. Navy P-3 Orion surveillance aircraft searched the Mediterranean Friday for traces of EgyptAir Flight 804 which went missing Thursday enroute from Paris to Cairo. The back-to-back P-3 missions followed on a search Thursday by a single one of the maritime patrol aircraft. All of the Orion flights originated from Naval Air Station Sigonella in Italy. | Military.com >>

What stands out to those who scuba dive with Cody Johnson isn’t that he’s missing most of his left leg; it’s that he’s a strong swimmer. It’s the ex-Marine’s outlook despite a string of misfortune that would challenge the sanity of the greatest optimist. | Arkansas Democrat-Gazette >>

After three military combat tours in warn-torn Iraq, Chase Millsap returned home to get on with a civilian life, but there was one thing he couldn’t do: leave a comrade behind, certainly not one who had saved his life. | AP >>

How does it feel to go to war? What does it feel like to come back? With less than one percent of the U.S. population in the armed forces, how are artist-veterans making bridges for a public that’s increasingly disconnected from the consequences of war? Is it ever truly possible to “come home?” Every war delivers a raft of new technologies, injuries, and artworks. | KCET >>

The United States announced an end to its embargo on sales of lethal arms to Vietnam on Monday, an historic step that draws a line under the two countries’ old enmity and underscores their shared concerns about Beijing’s growing military clout. | Reuters >>

The Veterans Treatment Court opened five years ago in Warwick, Rhode Island, as the first specialty court in New England to help veterans avoid jail and turn their lives around. Like Delaney, most of the 220 veterans who have completed the program haven’t committed another offense. The rate of recidivism stands at about 6 percent, according to the court. | AP >>

The Senate Armed Services Committee is embracing some Tricare fee increases proposed by the Obama administration, particularly for working-age retirees and their families. But it links those fee hikes to some surprising and long-overdue improvements in patient access and quality of care. | Stars and Stripes >>