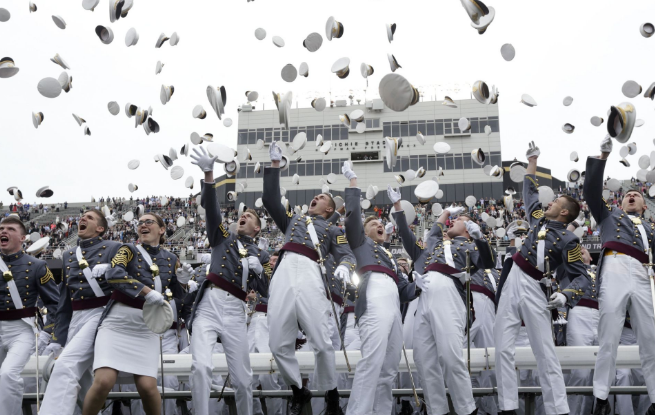 Graduates toss their caps in the air at the end of a graduation and commissioning ceremony at the U.S. Military Academy on May 21, 2016, in West Point, N.Y. Mike Groll, AP | Military Times >>

‘Nickled and dimed’: The military pay crunch is on a course to get considerably worse
If lawmakers follow through with the least generous pay-and-benefits proposals under consideration as part of the federal government’s 2017 budget process, next year could be one of the toughest in recent memory for military families’ finances. Even advocates accustomed to the political fights over service members’ quality-of-life issues say they’re surprised at just how much lawmakers seem to be targeting military benefits. And they worry it won’t hit troops’ wallets alone, but their morale too. | Military Times >>

Senate bill would extend coverage of in vitro fertilization to wounded veterans
U.S. military veterans who are infertile as a result of combat or training-related injuries still don’t have insurance coverage for in vitro fertilization (IVF), but that might change soon. A ban against coverage of IVF by the Department of Veterans Affairs came one step closer to being lifted this week, as the U.S. Senate’s passage of a large appropriations bill included a provision to overturn a more than two-decades old law. | Reuters >>

Congress warming to idea of medical marijuana for veterans
Congress is showing an increased willingness to let VA doctors talk to veterans about medical marijuana in states where it’s legal, although final approval is far from certain. The House approved a measure this week that would let Veterans Affairs Department doctors help their patients sign up for state medical marijuana programs, something the VA now prohibits. | AP >>

Taliban leader Mullah Akhtar Mansour has been killed in a U.S. drone strike in Pakistan, according to both Afghanistan’s spy agency and the country’s chief executive. One of the militant group’s senior commanders also told the Associated Press news agency that Mansour had died in “the Afghanistan-Pakistan border area” after he was targeted by an unmanned American drone. The mission, which was confirmed by U.S. officials, was authorized by President Barack Obama. | Time >>

In a reminder of the dangers US troops still face in Afghanistan, a US military convoy was attacked by a suicide bomber on Saturdaymorning and “heavily damaged,” an armored vehicle, a Kabul-based US military spokesman tells Fox News. There were no injuries to the US troops in the convoy, according to a statement from the US-led mission to Afghanistan. | Fox News >>

Afghanistan’s conflict is beginning to look more like a messy civil war than a straightforward struggle between the government and its Taliban enemies, judging from an outbreak of violence in recent days. | New York Times >>

U.S. Military officials Friday pointed to a key victory over ISIS in Iraq but acknowledged the bigger battles against the terror group are still to come. Iraqi forces have declared the key town of Rutbah “secure” from ISIS, a conclusion that the United States agrees with, according to spokesman Col. Steve Warren of the U.S.-led coalition. | CNN >>

Iraq’s military implored residents of ISIS-held Falluja to flee their homes Sunday as soldiers prepare for an operation to wrest the metropolis from the terror group. “I am calling for citizens who are inside Falluja to leave their areas and head towards safe corridors,” Iraqi Joint Operations Command Yahya Rasoul said on Iraqi TV. | CNN >>

Capt. James Kirk just got the keys to the baddest ship in the fleet — U.S. Navy’s fleet, not Starfleet. The ship is the future USS Zumwalt, the first of the Navy’s newest class of destroyers, and contractor General Dynamics turned it over to the Navy on Friday at Bath Iron Works in Maine. | CNN >>

Psyching out their adversaries will be one of the best ways Marines will dominate future battlefields, the general in charge of the Marine Corps’ cyber warfare command says. Unlike the other services, the Marine Corps is looking to build out offensive information warfare capabilities for Marine air-ground task forces, Brig. Gen. Loretta Reynolds, commander of Marine Forces Cyber Command, said at a recent panel discussion at the Sea-Air-Space expo outside Washington. | Marine Corps Times >>

A handful of airmen are breaking the Air Force’s “chair force” stereotype with their appetite to graduate from the Army’s elite Ranger school. The latest airman to do so is (drum roll, please) 39 years old. Chief Master Sgt. William “Ryan” Speck, is the first Air Force chief to graduate the 61-day combat leadership course at Fort Benning, Georgia, according to a recent release. | Air Force Times >>

Three years after he lost his right eye and was badly injured in a suicide bombing attack while searching for insurgents in Afghanistan, Sergeant Thomas Block now has a new mission: rescuing children from child predators. | Boston Globe >>

Dozens of bicycle riders came together to raise money for our veterans, supporting programs that give vets bikes and resources for rehabilitation. Some riders at the event today were veterans on their own roads to recovery. | WMTV >>

Female pilots who served in the military during World War II can officially have their ashes placed at Arlington National Cemetery, per legislation signed by President Barack Obama on Friday. Women Airforce Service Pilots, known as WASPs, were inurned at Arlington between 2002 and 2015, at which time then-Army Secretary John McHugh ruled that the practice violated federal law, the Wall Street Journal reported. | Time >>

House lawmakers will not have the first congressional hearing aboard an aircraft carrier after all. The House Armed Services Committee on Friday canceled the upcoming public meeting aboard the USS Dwight D. Eisenhower at Norfolk Naval Base and its plans to underscore the need for more Navy spending with one of the world’s most impressive backdrops. | Stars and Stripes >>

Republicans on a congressional subcommittee on Friday excoriated the Veterans Administration’s prescribing patterns and oversight of controlled substances during a hearing in Denver. The subcommittee, chaired by U.S. Rep. Mike Coffman, R-Aurora, highlighted a July review by the Drug Enforcement Administration of the Denver VA Medical Center that found mailroom employees at the Denver VA Medical Center with controlled-substance-related felonies with access to controlled substances. | Denver Post >>