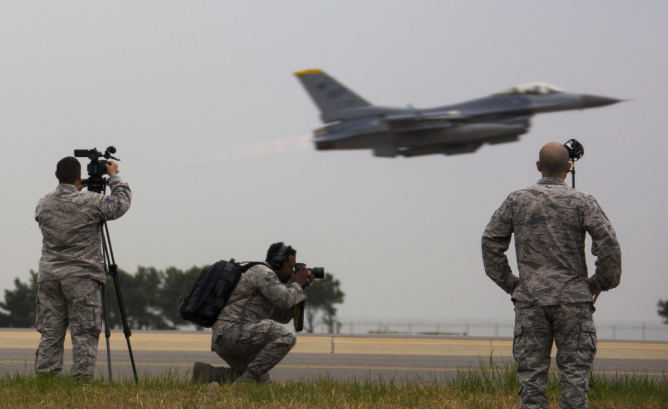 Commanders at the Army health system’s flagship Brooke Army Medical Center have shut more than half of the San Antonio hospital’s 28 operating rooms and curtailed elective surgeries because of a shortage of properly sterilized instruments. The San Antonio Express-News reports the hospital famous for treating victims in its burn ward found 73 cases of improperly sterilized instruments last month, including 16 where organic material like bone or skin fragments or blood was left on surgical tools. | Army Times >>

Tightening the eligibility requirements – already the strictest of any national cemetery – is one of several options that the Army outlined in its report, which asks Congress, veterans organizations and the departments of Defense and Veterans Affairs for urgency in making decisions about changes to eligibility or the size of the cemetery. Arlington is expected to reach capacity in about three decades if nothing changes, meaning most veterans from recent wars wouldn’t have the option to be buried there. | Stars and Stripes >>

“Each of those five priorities has a key health information technology piece,” said Alaigh. “There is no better time than right now to be at the VA. We are embarking on such an amazing journey around using data analytics, health services research, bench research and clinical trials in order to help ensure that our veterans are getting the best possible care, the highest quality of care, and the timeliness of care.” | Health Data Management >>

The Pentagon is considering sending between 3,000 to 5,000 additional troops to Afghanistan to advise Afghan military and police units fighting the Taliban, as well as an unspecified number of special operations forces to fight ISIS and al-Qaida militants along the Pakistani border. A senior Afghan defense official also told the Military Times that NATO was considering deploying up to 13,000 troops into the country. | Business Insider >>

As the battle against Islamic State intensifies in heavily populated cities, the U.S. military has reexamined the way it reports whether its daily bombing runs over Iraq and Syria are inadvertently killing civilians. The review, amid mounting criticism from victims and human rights and aid groups about the procedures, found that the military failed to report 80 civilian casualties from airstrikes during the last two years. | Los Angeles Times >>

The latest report from the federal government’s Afghanistan watchdog paints a picture of increased violence and bloodshed in the war-torn nation and suggests that preventing the Taliban and other insurgents from increasing their control of the countryside will continue to be a “challenge” for Afghan security forces. | NBC News >>

“The christening of the future USS Indiana brings this technological marvel one step closer to joining the world’s preeminent submarine force,” said the Honorable Sean Stackley, acting secretary of the Navy. “Thanks to the hard work, dedication and unparalleled skill of our nation’s shipbuilders, who continue to produce the finest submarines in the world, our Navy will continue to dominate the undersea domain long into the future.” | Navy Times >>

Amid rising tensions on the Korean Peninsula, the U.S. Air Force is set to conduct another long-range missile test on Wednesday, three U.S. officials told Fox News. The new test of a nuclear-capable intercontinental ballistic missile comes one week after a similar test, and in the wake of a series of defiant actions by the rogue North Korean regime. (Photo Right) | Fox News >>

Nearly four years ago, on July 2, 2013, Afghan soldiers were conducting a live-fire training exercise in Qaraghahi in eastern Afghanistan when the accidental blast occurred, according to the Army’s Military Review Journal. Clayton, a visual information specialist attached to 4th Armored Brigade Combat Team, 1st Cavalry Division, deployed to Forward Operating Base Gamberi, was capturing images as part of the Army training mission of certifying the Afghan soldiers on mortar operations. | Army Times >>

It can be a challenge to reintegrate from the military into civilian life, but a West Virginia-based non-profit is working to make the process a bit easier by bringing veterans together to share their stories and their love of the great outdoors. Mike Trost, 53, of Maryville, Tennessee, served in the U.S. Army for 32 years until he suffered serious injuries in 2012. “I was shot with a machine gun in southeastern Afghanistan,” he said of being hit in both legs, buttocks and his right hand. | The Daily Item >>

For many of the cyclists that crossed under the American flag at the Gettysburg All Star Expo on Sunday to finish the 12th annual World T.E.A.M Sports’ Face of America ride, the 110-mile bike ride was not the hardest thing they’ve overcome. Out of the hundreds of participants, many were veterans, and of those veterans, many had been wounded in battle. (Photo Right) | The Evening Sun >>

The nonprofit organization, on the grounds of the Marley’s Mission stables in Newton Twp., helps veterans overcome symptoms of post-traumatic stress disorder. About 70 people attended an open house Sunday where therapists, equestrians and veterans explained how the unique treatment, called equine-assisted eye movement desensitization and reprocessing, or EA-EMDR, works. | The Times-Tribune >>