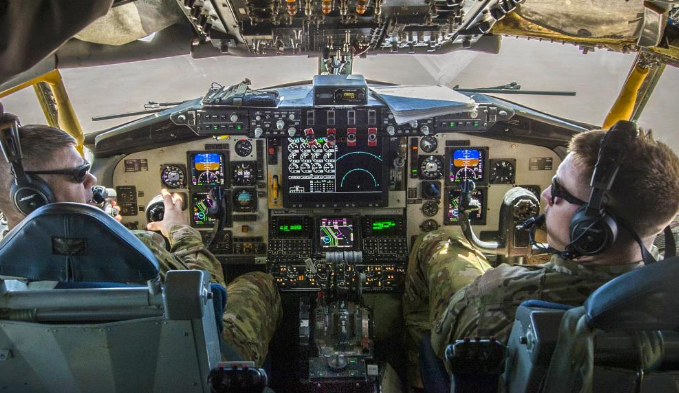 Feeling an obligation to do his part for his country, Paul Rieckhoff enlisted in the Army after graduating from college in the years just before 9/11. After the Twin Towers fell, Paul found himself in uniform working tirelessly at Ground Zero. It wouldn’t be long after that he would trade the dust and debris of 9/11 for the sands of Iraq, fighting as an infantryman at the beginning of Operation Iraqi Freedom. | Hazard Ground >>

VA officials say the scam phone number will not provide any information on the Choice Program or its eligibility criteria, but it will offer a $100 rebate for the caller’s credit card information. The VA says they would never ask for this information, nor would they ever offer incentives through the Choice Program. | Military Times >>

Syed Ali is an American citizen, an officer in the New York Police Department, a combat veteran and a major in the United States Army Reserve. But none of that made a difference at passport control last month when he arrived at Kennedy Airport on an evening flight from Istanbul. | The New York Times >>

Brig. Gen. Roger B. Turner Jr., asked what additional forces would be helpful, said that his unit has enough “capabilities, capacities and authorities” now but that if the mission grows, “then we’re not going to have enough to do what we need to do.” His terminology describes not only the number of troops his unit has but the kinds of operations they are trained to do and what rules they must follow. | The Washington Post >>

Iraqi forces have dislodged Islamic State from all but 12 square km of Mosul, a military spokesman said on Tuesday, after planes dropped leaflets into the city telling civilians the battle was nearly won. Seven months into the U.S.-backed campaign, the militants now control only a few districts in the western half of Mosul including the Old City, where Islamic State is expected to make its last stand. | Reuters >>

As the Trump administration considers sending several thousand more American troops to Afghanistan as part of a broader NATO buildup, to join the 8,400 U.S. troops and several thousand more from allied countries there today, many Americans will wonder why.  Already America’s longest war, a place where more than 2,000 Americans have died to produce at best fragile and highly imperfect results, many will want to pose General David Petraeus’s famous question first voiced about Iraq in 2003: “Tell me how this ends.” | USA Today >>

“We are getting back into, after decades really, an era of maritime competition,” Richardson told reporters on the pier alongside the USS Coronado at the Changi naval base. “Some of these global powers, China, Russia, they’ve been growing, China in particular. They’re maturing in every dimension of power (and) at some point you turn to the sea to expand and continue to prosper.” | U.S. News and World Report >>

After a little more than a year of research and more than 20 attempts to get the right materials, an Air Force Academy cadet and professor have developed a kind of goo that can be used to enhance existing types of body armor. As part of a chemistry class project in 2014, Cadet 1st Class Hayley Weir was assigned epoxy, Kevlar, and carbon fiber to use to create a material that could stop a bullet. | Business Insider >>

Chelsea Manning will remain on active duty following her release from military prison at Fort Leavenworth, Kansas on May 17, the U.S. Army said Sunday. Manning will be an unpaid soldier and will be eligible for health care and other benefits, USA Today reported. Army spokesman Dave Foster told the paper that she will remain a private in the Army. | Fox News >>

Billy Kesselring had an idea for a product he would buy if someone else had thought of it. A hiker and a major in the Wisconsin National Guard, Kesselring wanted a walking stick that doubled as a survival tool, complete with fishing line, water filter, fire starter and snare wire hidden inside, along with a knife and 25 feet of parachute cord. So he built one and called it the Guardian Survival Staff.  | Milwaukee Wisconsin Journal Sentinel >>

Air Force veteran Karen Reed smiles after realizing the irony of saying she and fellow veterans fishing at Evergreen Lake last week were all “in the same kind of boat.” She was referring to the similar experiences and adjustment to post-military life of each of the 10 vets who participated in the three-day fishing outing organized by a local group called HOOAH, Helping Out Our American Heroes. | The Pantagraph >>

The Sixth Annual National Wounded Warrior Tennis Camp at the Balboa Tennis Club started on Monday, May 15, 2017.  Over 50 wounded, ill, and injured service members from across the country will participate in the four-day event. | The San Diego-Union Tribune >>