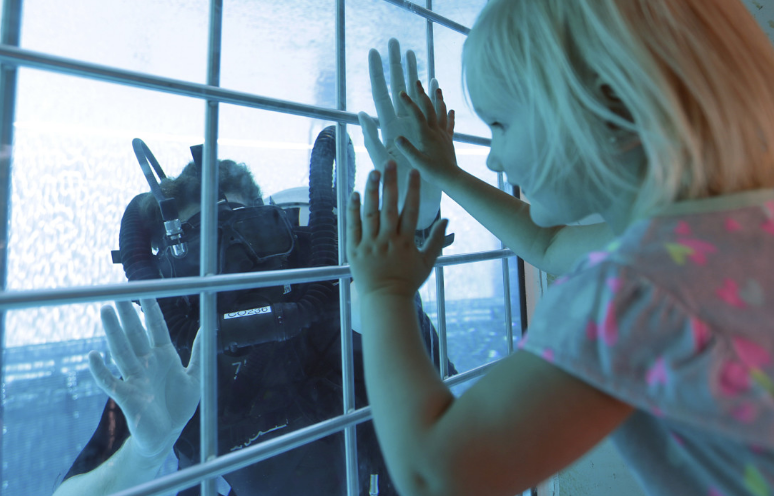 “There is some hope, because now that we know a little more about what part of the brain is different in its performance after a person develops PTSD, we can target treatment to manipulate that area,” said Maya Khanna, one of the lead authors of the study and an associate professor of psychology at Creighton University in Omaha, Nebraska. The study was published Monday in the Cambridge University Press journal Psychological Medicine. | Military Times >>

Trump promised that the private hotline would be “devoted to answering veterans’ complaints of wrongdoing at the [Department of Veterans Affairs] and ensure no complaints fall through the cracks.” The hotline was to be “active 24 hours a day answered by a real person.” | The Hill >>

If the legislation was passed, the VA secretary would have more power to remove or demote under-performing and incompetent employees while giving whistleblowers more protection, including creating the Office of Accountability and Whistleblower Protection in the VA. The bill would also ensure more accountability in the VA medical system, giving the VA secretary the ability to “directly appoint individuals to the positions of Medical Center Director and Director of Veterans Integrated Service Network (VISN) if they have demonstrated ability in the medical profession, health care administration, or health care fiscal management.” | Sunshine State News >>

For Afghans who have endured nearly four straight decades of conflict, the prospect of additional U.S. troops is deeply controversial. Some view it as a much-needed lifeline for a flailing government; others worry it will add fuel to the insurgency and extend a war that has already killed more than 30,000 civilians. | Los Angeles Times >>

During a visit south of Mosul on Monday, a senior U.S. official praised territorial gains against the Islamic State group in Iraq, but local officials cautioned more aid is needed to rebuild on the heels of victories against the extremists. The Mosul fight is approaching its “final stages,” Brett McGurk, special presidential envoy for the global coalition against the IS, told The Associated Press during a meeting with Iraqi military and civilian officials at a water treatment plant near the town of Hamam al-Alil. | ABC News >>

Host regimes therefore often look the other way when their officers sell U.S. supplies on the black market, pocket the U.S.-provided salaries of “ghost soldiers,” use U.S.-provided equipment to settle scores with rival groups or extort protection payments from local civilians. This kind of corruption buys the loyalty of heavily armed elites who might otherwise be rivals, and it protects the regime’s internal political position. | The Washington Post >>

Less than a week after the Army released its latest selective retention bonuses, the service has sweetened the deal with more money across the board. Every soldier who is eligible for a bonus as of May 24 is having their pay tier bumped up, according to the Army’s retention operations office. | Army Times >>

A public information session will be held Monday to address citizen questions about the 94,000 gallons of jet fuel that spilled at Oceana Naval Air Station Wednesday. A unified command team of federal, state and local officials will hold the information session at London Bridge Baptist Church, located at 2460 Potters Road, from 5 to 7 p.m. (Photo Right) | The Virginian-Pilot >>

U.S. Army and Marine Corps troops downrange carry a hell of a lot of stuff. According to a new Government Accountability Office report on the branch efforts to improve personal protective equipment, or PPE, Marines fighting in Iraq or Afghanistan in 2016 humped an average 117-pound load. For the Army, it was 119 pounds, and that figure will likely increase for personnel deployed to Afghanistan in 2017. | Task and Purpose >>

Bohnenkamp also developed a love for learning and soon turned to Western Illinois University in Macomb, Ill., where he found a welcoming environment in anthropology studies. The university faculty became aware of his interested in Arabic, and, while the language was not part of the regular offerings, they arranged for him to study with a. Tutor. | The Hawk Eye >>

At least 15 percent of U.S. military servicemen and women suffer from post-traumatic stress disorder, or PTSD.  Intense psychotherapy and medication are the traditional therapies. Now, researchers are studying the impact of one form of martial arts on veterans. Jiu Jitsu is more than just combative martial arts for Army veteran Jacob King. (Photo Right) | KSAT >>

“I feel like my work is paying off,” said Minnis, who finished college with a 4.0 GPA. “I’m married with two children and I also work 30 hours a week, so I have a very tight schedule.” | The News-Gazette >>