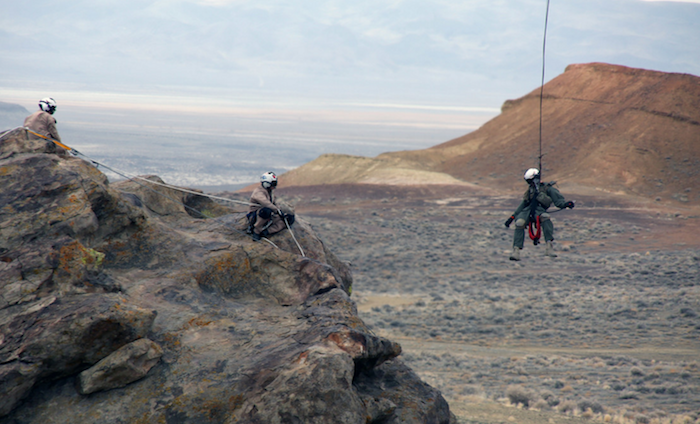 A group of soldiers, family, and community members came together Saturday to fight a deportation order for a former U.S. soldier. Army Private 1st class Miguel Perez, Jr., was born in Mexico and grew up in Chicago. On Monday, Perez faces a deportation hearing because he committed a non-violent drug offense, his family said. | ABC 7 Chicago >>

Officials at the Durham VA hospital said Friday changes have been made after troubling photos of the facility’s waiting room were posted to Facebook. The couple that posted the photos said they witnesses older vets being mistreated and ignored during lengthy waits for service. One photo showed a veteran in pain lying on the floor. | ABC 11 >>

Veterans of the U.S. and foreign militaries are drawn to the front lines here in the fight for Iraq’s second-largest city. Besides military experience, they bring medical skills, part of a toolkit they use to save the lives of Mosul’s “most vulnerable.” What they find, on the edge of a battle now in its fifth month, is a familiar camaraderie — born of adrenaline-pumping action and mind-numbing boredom. | Military.com >>

Britain agreed on Sunday to arrange 10 billion pounds ($12.3 billion) in loans to finance infrastructure projects in Iraq over a 10 year period, a program that would only benefit British companies, an Iraqi minister said in Baghdad. The two countries signed a memorandum of understanding in the Iraqi capital that serves as a framework to provide up to 10 billion pounds in funds to specific projects during this period, including water, sewage, electricity, healthcare and transport. | Reuters >>

“I am deeply unhappy that I left behind patients, especially female patients in remote villages – they are not in a condition to explain all types of their sickness to male doctors – so it would be very difficult without a female doctor,” she says. Religious and cultural mores mean that women rarely visit male doctors for any condition, never mind a gynaecological one, and Dr Kakar, 39, realised that leaving her post in Paktika province left her patients dangerously vulnerable. | BBC News >>

The battle to uproot the so-called Islamic State, which is centered in the cities of Mosul, Iraq, and Raqqa, Syria, has been underway for months, using local forces backed by U.S. advisers and air power. The president wants it done faster. | The Inquirer >>

The unseemly episode is deeply embarrassing for the Marine Corps and the Defense Department, proud institutions that, like many college campuses around the country, have struggled to curtail widespread problems with sexual assault. At the same time, it exposes an unsettling rift within a segment of American society consistently regarded as reputable, honorable and trustworthy. | Marine Corps Times >>

These days, short-staffed Shaw maintainers often work 12-hour-plus days, 60 hours a week, and they come in on weekends at least twice a month. Many are fed up with the stress, the long hours, and the extra duties — such as physical fitness training and professional military education — taking up time that could otherwise be spent with their families. And, increasingly, they’re seeing their fellow airmen hang up their wrenches once and for all. | Air Force Times >>

Soldiers have been discussing the idea behind closed doors and in open forums for years, but the push to research the possibilities and make a decision really picked up earlier this year, according to the Army G-1 uniform policy sergeant major. “It’s more driven from the religious accommodations group,” said Sgt. Maj. Anthony Moore, referring to a working group that made the recommendations that informed the Army’s authorization of beards for Sikh men in uniform. | Army Times >>

A non-traditional student, she enlisted in the U.S. Army when she was 18. It was her service that led George W. Bush to select her as one of a group of veterans he chose to honor in his book, “Portraits of Courage: A Commander-in-Chief’s Tribute to America’s Warriors.” She was also featured on the “Today” show on Feb. 27, as one of several veterans, showcasing Bush’s new book. | Daily Herald >>

“Before my injury I was a person that could walk into a place of 100 strangers and within probably less than 15 minutes everyone knew me and I knew a majority of them,” he said, fighting back tears. “Because I was in impressionable person. After my injury, I didn’t want to reach out.” | WLBZ >>

Gordon said the family prepared to meet the staff sergeant in Germany if Eric lived long enough in transport to the facility. “He was stable enough to be brought back to the states, so we prepared to see him in Washington at Walter Reed (Hospital),” Gordon said. “When we arrived, the doctors told us to unplug him from life support. They said Eric would be in open-eye coma for the rest of his life.” | Rio Rancho Observer >>