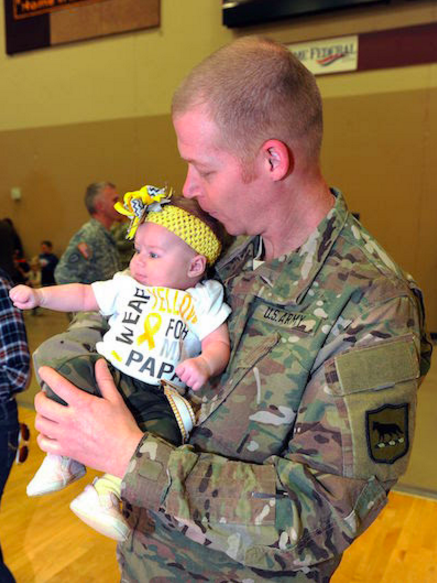 House appropriator casts doubt on VA funding increase
A key House appropriator hinted Tuesday he may block another funding increase for the Department of Veterans Affairs next year, noting more than a decade of steady spending boosts for veterans programs. Rep. Charlie Dent, R-Pa., who chairs the Appropriations veteran affairs subcommittee, called the White House request for a $3.6 billion hike next year “a real heavy lift in the current environment” and “a non-starter.” | Military Times >>

Veterans seek alternative treatments to post-traumatic stress
In the news, stories of PTS tend to focus on bureaucratic mishandling, ineffective medications that have severe side effects and the general tragedy of those who are afflicted. However, there is also a side of the story that has to do with hope, strength and love. While a single cure has not yet been discovered for PTS, there are many instances of veterans finding peace and a path to recovery through some non-conventional — and often controversial — means. | Las Vegas Review-Journal >>

Counsel for whistleblowers blasts IG reports on VA wait time scandal
The VA Office of Inspector General has started publishing its findings of investigations launched two years ago into charges that VA medical facilities adjusted patient appointment schedules to meet department standards. Now the conclusions in at least two of 77 completed investigations have prompted the U.S. Office of Special Counsel and several senators to question the VA watchdog agency’s independence, calling for a review of what they say is the IG’s “failure to respond to the issues raised.” | Military Times >>

A suicide bomber and gunmen attacked an Indian consulate in eastern Afghanistan on Wednesday, Indian and Afghan officials said, sparking an hourslong gunbattle that left at least three people dead and more than a dozen others wounded. | Wall Street Journal >>

About 1,000 soldiers from the 3rd Cavalry Regiment will deploy to Afghanistan in late spring, the Army announced Wednesday. The soldiers, from Fort Hood, Texas, will deploy as part of the regular rotation of forces in support of Operation Freedom’s Sentinel, the U.S. component of the Resolute Support mission. | Army Times >>

An ISIS operative captured in Iraq by U.S. Special Operations forces will only be detained for a “short term,” U.S. Central Command spokesman Col. Pat Ryder said Wednesday. Ryder would not specify exactly how long the unidentified militant would be held, or whether substantial intelligence could be acquired during that time. | Fox News >>

Iraqi officials hailed on Wednesday the progress achieved by government troops on the second day of a military operation aimed at dislodging Islamic State militants from a key area north of the capital, Baghdad. | AP >>

Iraq signed a deal with an Italian company on Wednesday to repair and maintain its largest dam, near the northern, Islamic State-held city of Mosul, which is in danger of catastrophic collapse, a government spokesman said. | AP >>

With Master Chief Petty Officer of the Navy (AW/NAC) Mike Stevens saying it’s time for making it more related to sailors’ jobs, Navy Times wanted to hear your ideas to improve it. Dozens wrote in with their recommendations and a hundred chimed in with their thoughts online, from calls for more command PT to modeling an occupational fitness test off that taken by the Navy SEALs. | Navy Times >>

Marine aviation squadrons are suffering more than ground units after 15 years of war and deep budget cuts, Commandant Gen. Robert Neller told lawmakers on Tuesday. “We would — as a goal — like to have 80 percent of our units ready to go,” Neller said at House Appropriations Defense Subcommittee hearing. “We’re not quite there, particularly on the aviation side.” Readiness levels for ground units are “trending up,” Neller said. | Marine Corps Times >>

When Judy Brown of Hillsdale, Ind., came home from Iraq, a group presented her with a patriotic quilt. It was so touching that the Army veteran vowed to pass along the honor, and began making quilts for other veterans. Brown’s personal quilt, which has campaign medals and other touches from her combat service, is one of about 50 pieces featured at the Veterans Experience 2016 art show. | Danville Commercial News >>

Two action-packed novels just hitting the shelves are both set in Iraq and both written by former junior combat arms officers who both left the military in 2009. The stories draw largely from their own experiences in the war-torn region. | Military Times >>

Washington Irving once said, “There is certainly something in angling that tends to produce a serenity of the mind.” Veterans group Project Healing Waters Fly Fishing Inc. will attest to that. Since 2005, the national group, which has a local chapter in Huntsville, has been working to provide that tranquility to disabled active military service personnel and disabled veterans through fly fishing outings. | The Redstone Rocket >>

A Green Beret selected last year for involuntary separation from the Army because he hit an admitted child rapist in Afghanistan will remain with the service at least two more months. However, some lawmakers in Congress have said the Army’s decision this week to postpone a verdict on Sgt. 1st Class Charles Martland’s future with the service is not enough. | Stars and Stripes >>

Sharon Helman, the disgraced former director of the Phoenix Veterans Affairs hospital, pleaded guilty to a felonyTuesday, but the terms of her plea deal spare her any time behind bars. | Daily Caller >>