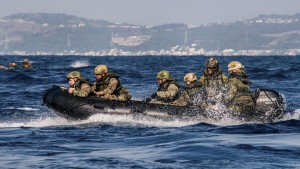 The Government Accountability Office is questioning whether the Veterans Affairs Department has the right people, skills and attention devoted to removing VA healthcare from its biennial High-Risk List. GAO offered its expertise to help VA leadership address its challenges, and it has seen some progress. But it’s not good enough, and VA remains on the 2017 list. | Federal News Radio >>

Environmental advocates who want Gov. Larry Hogan to support stronger carbon emissions cuts hosted an event at a veterans training center in Baltimore to tout the benefits. The Regional Greenhouse Gas Initiative, a joint effort among nine states including Maryland, calls for emissions to be reduced by 2.5 percent per year through 2020. | The Baltimore Sun >>

Iraqi government forces battling Islamic State for Mosul took control of a main bridge over the Tigris river on Wednesday and advanced towards the mosque where the group’s leader declared a caliphate in 2014, federal police said. The seizure of the Iron Bridge, linking eastern Mosul with the militant-held Old City on the west side, means the government holds three of the five bridges over the Tigris and bolsters Prime Minister Haider al-Abadi’s assertion that the battle is reaching its final stages. | Reuters >>

About 60 soldiers from the Iowa National Guard’s 185th Combat Sustainment Support Battalion will return to Des Moines on Saturday from deployment in Afghanistan. The Guard will host a homecoming ceremony at 3 p.m. at its Des Moines Airbase, 3100 McKinley Ave. | The Des Moines Register >>

Iraq pumped 4.57 million barrels a day of oil in February and plans to boost output later in the year even as the OPEC member reaffirmed its commitment to the group’s decision to cut production to counter a global glut. The country plans to increase output to 5 million barrels a day by the end of 2017, Oil Minister Jabbar Al-Luaibi said Wednesday at a news conference in the southern city of Basra. Iraq exported 3.87 million barrels a day from its southern and northern shipment hubs in February, the ministry’s spokesman, Asim Jihad, said in an emailed statement. | Bloomberg >>

Marine Commandant Gen. Robert Neller has made it clear that Marines who engage in cyberbullying and other predatory behavior online can face criminal charges. “Marines have got to understand that using social media to degrade, denigrate or be disrespectful to another Marine is not just not who we are, but it’s illegal,” Neller told lawmakers on Tuesday. | Marine Corps Times >>

There was a rise in reports of sexual assault at U.S. Navy and Army military academies in the last year, the Department of Defense said on Wednesday. An annual report, based on anonymous surveys, said reports of sexual assault in total across the military academies had decreased slightly in the last year, and the Air Force Academy specifically saw a decrease from 49 reports to 32. | US News and World Report >>

Green, best known as the special operations soldier who interviewed former Iraqi President Saddam Hussein after his capture by American forces in 2003, would be the second person nominated by Trump for the post. Last month, billionaire veteran Vincent Viola dropped out of the confirmation process citing numerous conflicts of interest with his family businesses. | Military Times >>

Rieckhoff stated, “These dedicated men and women are America’s next greatest generation. Their dedication and tenacity represents the very best of the Texas spirit and American ingenuity. In tough times, you need tough people. And these graduates of Retail Ready are the tough people our country and our economy need right now. Smart employers big and small will jump at the opportunity to have these folks join their team. They are not a charity, they’re an investment. Retail Ready is leading the way and America should take notice.” | ACHR News >>

The last worry veterans should have is where they’re going to sleep at night once they return, but for the nearly 40,000 homeless veterans that find themselves on the street each night, this worry is a disturbing reality. But dropping struggling veterans into thriving, pre-existing neighborhoods and communities with residents that haven’t experienced what it’s like to serve can be quite counterproductive and detrimental — A slow, smooth transition is necessary for lasting success and change, much like any major life transition. | AOL Finance >>

“He started crying. And I just sat with him for like 10 minutes and talked to him and got his story,” Cornwell told Fox News. “I thought if I had this effect on just one person, what effect would have I have on many more.” From that night on, Cornwell has a new mission: to help the more than 300 homeless veterans in his northern California community and to inspire others around the country to do the same. | Fox News >>