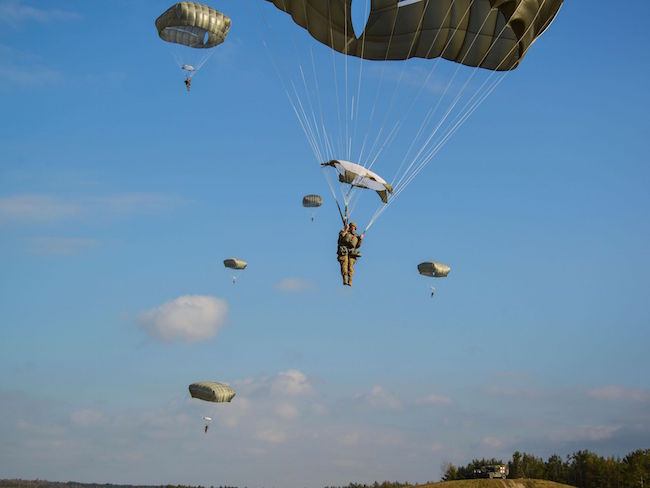 Today’s Top Stories
SEAL receives Medal of Honor for valiant acts in Afghanistan
When Navy SEAL Edward Byers Jr. told his mom, Peggy, he would be receiving the Medal of Honor at the White House on Monday, she had one question: “Can I come?” President Barack Obama laughed as he recalled the story before placing the nation’s highest military honor around Byers’ neck. | Fox News >>

Veterans Seek Help for Infertility Inflicted by Wounds of War
During a firefight in Afghanistan in 2005, Army Cpl. Tyler Wilson, 20, was hit by a bullet that pierced his spine and left him paralyzed below the waist. Since then, the Department of Veterans Affairs has provided him with free health care, as it does for all veterans who were disabled while serving. Yet there was a gap in his coverage that came as a shock. | New York times >>

VA watchdog releases reports on wait-time manipulations
Reports documenting scheduling problems and wait-time manipulation at the Department of Veterans Affairs are being made public, as the agency’s internal watchdog bows to pressure from members of Congress and others to improve transparency. | Associated Press >>

Afghanistan
The Green Beret being kicked out of the Army for beating an alleged child rapist in Afghanistan has been given another extension — this time until May 1 — to appeal his separation from the service. | Army Times >>

The Pentagon is reassessing the number of U.S. troops it will leave in Afghanistan at the end of the year, based on the needs of local forces, the nation’s top military officer said Monday. The current plan is to draw down to 5,400 U.S. troops in Afghanistan before 2017. But the chairman of the Joint Chiefs of Staff said the Afghan forces needed more help than anticipated during their first year in charge of their own security last year. | The Hill>>

Afghan forces gunned down a policeman suspected of aiding the Taliban and further detained 30 other policeman Friday, including a top official. U.S. troops backed the Afghan military in a Friday operation that ferreted out the link between corrupt local police and Taliban insurgents in Sangin, which is located in Helmand province, Reuters reports. | The Daily Caller >>

The death toll has risen to 38 after an IS suicide bomber struck an Iraqi funeral Monday, wounding dozens in a crowded reception room. A local Shiite militia leader is among the dead in a town north of Baghdad that saw a wave of revenge attacks after a similar bombing in January. | Associated Press >>

The United States warned its citizens to be ready to leave Iraq in the event of what it has said could be a catastrophic collapse of the country’s largest hydro-electric dam near Mosul. Iraqi officials have sought to play down the risk but Washington urged its citizens to make contingency plans now. | Reuters >>

Military Affairs
The Navy and Marine Corps will operate new platforms at the Freedom Banner and Ssang Yong exercises that start in South Korea this week and experiment with new concepts they hope will streamline and improve future amphibious landing capabilities in the Pacific. | Stars and Stripes >>

The best fitness test should measure a sailor’s ability to perform his or her job, from navigating a shipboard environment in heavy firefighting gear to carrying a lame shipmate out of a danger zone. That’s the thinking of the Navy’s top enlisted, who’s raising the possibility of a tough new fitness test that could replace or augment the existing physical readiness test. | Navy Times >>

A Sikh U.S. Army captain is suing the Army over the right to wear a turban and keep his beard. Simratpal Singh filed a federal lawsuit Monday to challenge the Army’s rules that he remove his turban and shave his beard, both of which Singh says are protected as religious expression as part of his Sikh beliefs. | The Daily Caller >>

#VetsRising
Ret. Sgt. Tom Block is sitting in the classroom, looking restless. He and 23 other highly specialized, highly coveted candidates are all vying for a job where they will be exposed to some of the most horrifying images humanity can produce. Each candidate is a veteran of America’s recent wars. Many were part of the elite special ops forces. They conducted daring, covert missions to take out America’s most dangerous enemies. | CNN >>

When Capt. Kerri Turner made up her mind to compete for a title that would make her a symbol of the modern woman veteran, she called on the stories of female soldiers who came before her. She wove a narrative linking women who’ve served on the front lines from the days of the American Revolution to today’s battlefields in Afghanistan. Her monologue stole the show and helped her earn the ceremonial role of Ms. Veteran America 2015. | The News Tribune >>

The former Marine sergeant isn’t sure what memories haunt his sleep. His wife, April, told him he occasionally mumbles as if he’s having a tense conversation or utters a series of coordinates as if he’s calling for reinforcements. But now, instead of jolting awake harshly, a yellow Labrador retriever named Bosko licks his face. | Toledo Blade >>

Inside Washington
Officials from all five of the armed services (don’t forget the Coast Guard) will visit Capitol Hill this week to talk about their fiscal 2017 budget priorities, as the annual appropriations process slowly advances through Congress. | Military Times >>

The Department of Veterans Affairs is moving forward with a new program to transport former members of the military to and from VA hospitals. The Veterans Transportation Service announced Monday that it would transport veterans to military hospitals for “examination, treatment, and care.” | The Hill >>

The seven remaining top contenders have each vowed to address the problems that have plagued the VA since 2014. But along with the promises, each candidate, too, carries some heavy baggage on veterans’ health issues. | Healthline >>