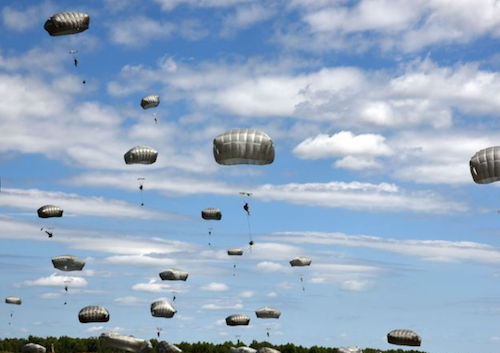 Supporters of the amendment fired off two letters Monday. In one, a bipartisan group of senators called on President Obama to open up an independent investigation into allegations the Pentagon misled Congress on the issue. In another, the author of the report making the allegations shot back at the Pentagon’s criticisms and asked for a sit down with Defense Secretary Ash Carter. | The Hill >>

Frantzen is one of the local volunteers mobilized after storms last week quickly dumped 10 inches of rain in the county, killing 16 people across the state and collapsing roofs and surging in low areas to uproot broad cedar trees off quiet back roads. | Stars and Stripes >>

A blue ribbon panel studying the future of Veterans Affairs health care is poised to recommend an overhaul to the system that would create a structure similar to the Pentagon’s Tricare program, where veterans could choose to use either the VA for their care or see a network provider. | Military Times >>

Iraq, which relies on oil to fund nearly its entire government, increased daily oil production to an all-time high of 4.5 million barrels in May, according to estimates from research firm JBC Energy. | CNN >>

Zabihullah and David died when the armored Humvee they were riding in, part of an Afghan military convoy, was struck by a rocket-propelled grenade fired by Taliban militants. | NPR >>

At least five people were killed and 10 others wounded on Tuesday when a car blew up in the Shi’ite holy city of Kerbala south of Baghdad, an Iraqi security officer said. | Reuters >>

Scientists with the U.S. Navy are working to develop an augmented reality display for divers’ helmets that would enable them to see photos, sonar readings and texts while working under water. | PC World >>

Senators clashed Tuesday over tighter restrictions on more than $1 billion worth of medical research conducted through the Defense Department. Sen. John McCain, R-Ariz., proposed making it more difficult for Congress to sponsor research through the department on general health problems such as breast cancer, epilepsy and tick-borne diseases, saying the military funding should go only to battlefield medicine. | Stars and Stripes >>

Seven years ago on the anniversary of D-Day, President Obama met Army Ranger Cory Remsburg while visiting Omaha Beach. Just eight months later, on his tenth deployment, Remsburg was nearly killed by a massive roadside bomb in Afghanistan. He sustained devastating injuries, including brain damage, that took away both his abilities to talk and walk. | ABC News >>

When former U.S. Army soldier J.T. Ibanez returned home from Iraq in 2004, just going to the grocery store was a challenge. He’d intentionally do his shopping in the morning or early afternoon when there were fewer people around. | Task and Purpose >>

A U.S. Army veteran is using his talents in a unique way, to pay tribute to those who’ve served in the Armed Forces. Jeff Metheny paints with toothpicks. It’s a talent he discovered while overseas in Afghanistan. But, it also helps him deal with Post Traumatic Stress Disorder (PTSD). | WTVO >>