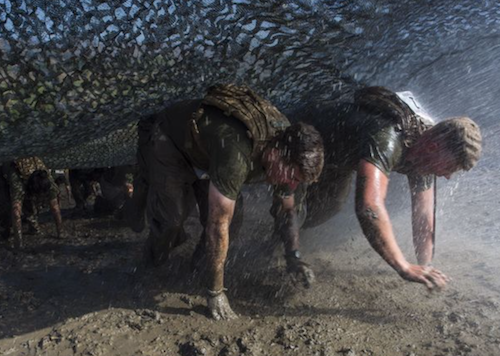 Today’s Top Stories
When Charlotte veteran Allen Thornwell lowered his employer’s American flag to half-staff on Memorial Day, he says he did not think to ask permission or consider the possibility that he had done anything wrong. | Military.com >>

“The notion of dismantling the VA system would be a mistake,” Obama told The Gazette on Thursday after he shook the hands of 812 new Air Force officers – all of whom will someday be veterans. | The Gazette >>

When clinical psychiatrist Cher Morrow-Bradley and other health care providers call the Veterans Choice program, they are greeted with a recorded, 90-second “thank you” from Veterans Affairs Secretary Bob McDonald. | NPR >>

ISIS is targeting civilians attempting to leave the militant-held city of Falluja, as Iraqi forces and militia attempt to wrest back control of the city, a European non-profit operating in Iraq says. | CNN >>

David Gilkey, an NPR photojournalist who chronicled pain and beauty in war and conflict, was killed in Afghanistan on Sunday along with NPR’s Afghan interpreter Zabihullah Tamanna. | NPR >>

Afghanistan’s president has thrown his support behind a push to classify lapis lazuli as a “conflict mineral” after a global advocacy group said Monday that militants — including the Taliban — earn up to $20 million a year from illegal mining of the rare blue stone. | US News and World Report >>

All U.S. Navy sailors in Japan are banned from drinking alcohol and restricted to base except for essential trips after several recent alcohol-related incidents which the Navy’s 7th Fleet said are harming U.S.-Japan relations. | CNN >>

Veterans applying for Department of Veterans Affairs jobs are routinely grilled about whether their combat experience makes them mentally unstable, despite a long-standing federal personnel policy that bars such inquiries. | The Daily Caller >>

“So in my opinion, I think women should register for the selective service. I see no reason not to. Of course, this is a timely debate, and reasonable people have differences of opinion. There are people who say perhaps we don’t need a selective service approach at all these days, because it has been years since the draft,” said James. | CNS News >>

Those visiting the Salisbury National Cemetery might run into a veteran who has made it his mission to salute every grave marker in the cemetery. | Salisbury Post >>

The newly crowned Miss USA is a 26-year-old Army officer from the District of Columbia who gave perhaps the strongest answer of the night when asked about women in combat. | Army Times >>

In the midst of a high-octane week of activities to celebrate veterans in and around Virginia Beach, the scene at Owl Creek Boat Ramp was a world away from the sky dives and the masses listening to rock and country music at the Patriotic Festival at the Oceanfront. | The Virginian Pilot >>