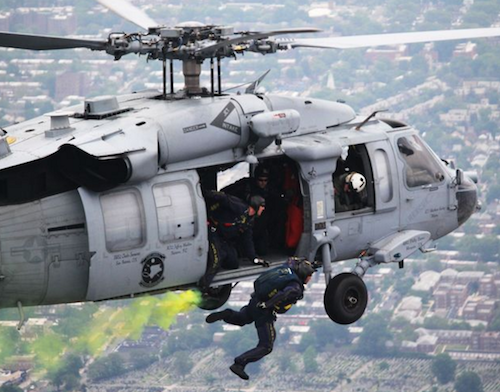 Aircrew Survival Equipmentman 1st Class Victor Maldonado, member of the Navy Parachute Team, the Leap Frogs, jumps out of an MH-60S Seahawk helicopter from the Fleet Angels of HSC-2 on May 30 during a skydiving demonstration above Citi Field before a New York Mets baseball game. Lt. Cmdr. Scott Moak/Navy | Military Times >>

Seventy-two years ago, on June 6, 1944, Allied troops waded ashore on the beaches of Normandy to liberate Nazi-occupied Europe. | Military Times >>

Reportedly, in order to prevent his aircraft from hitting into an apartment building, Kuss purposefully did not eject so that he could maneuver the aircraft away from the building. | American Military News >>

Nearly everything about the barbers at one establishment of suave Iraqi hair is at odds with the puritanical militants who overran their home towns. | The Washington Post >>

An Afghan lawmaker and at least three other people have been killed in a bomb explosion in the capital, Kabul. MP Sher Wali Wardak was injured in the blast outside his house and died on the way to hospital, officials said. No group has so far admitted carrying out the attack. | BBC News >>

An Iranian-backed Sh’ite Iraqi militia said on Saturday it planned to storm Falluja, Islamic State’s stronghold near Baghdad, once civilians left the city, backtracking on earlier statements that it would leave this task to the Iraqi army. | Reuters >>

When Staff Sgt. Chris Brown headed into the swamplands of Georgia for a military training exercise early this spring, he found himself missing his time in Iraq and Afghanistan — and the relative comforts he had enjoyed there at the height of both wars. | New York Times >>

“It used to just really irritate me when I would be going to an event, say for a holiday party that a general officer is hosting, and we would have military men and women in uniform entertaining us,” she added. “I used to be uncomfortable with it — that we’ve got these enlisted troops whose job was to entertain generals and their guests at various events.” | Politico >>

The new rules give Marines a bit more leniency when it comes to their body ink and combines three previous policies into a single bulletin that spells out in meticulous detail – 32 pages worth to be exact – where leathernecks can have tattoos. | Marine Corps Times >>

“I kept meeting these people overseas, and they’d ask me what it’s like at Yosemite or some other national treasure, and I was ashamed to admit I’d never been to them,” he says. “I decided I needed to go see these meccas and experience what it was I’d actually been defending.” | Military Times >>

Saturday at Fenway Park already was a celebration of veterans, but it turned into an even bigger one in the fourth inning of the Boston Red Sox’s game against the Toronto Blue Jays. | NESN >>

Months ago, Mitchell Reno was sitting in a hotel room with a half-gallon of vodka and dark plans. But this April afternoon found him serenely still as a stallion kicked up sawdust in an arena in Poplar Grove. Slashes across the horse’s heaving belly and back revealed fights in the Wyoming wild. | Chicago Tribune >>