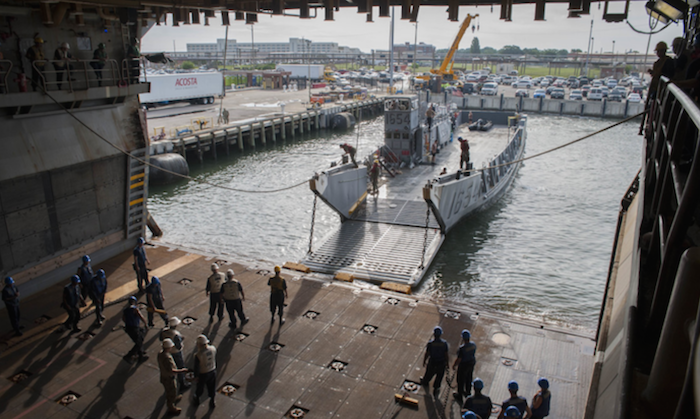 The bill would phase out extra federal money that the Affordable Care Act is providing to 31 states to expand Medicaid to additional low-income earners. According to a Congressional Budget Office analysis released Monday, coverage losses would especially affect people between ages 50 and 64, before they qualify for Medicare, and with incomes below 200 percent of poverty level, or around $30,300 for an individual. | ABC News >>

“Suicide prevention is my top clinical priority,” Shulkin said in a statement. “We want these former service members to know there is someplace they can turn if they are facing a mental health emergency, whether it means urgent care at a VA emergency department, a Vet Center or through the Veterans Crisis Line.” | Military Times >>

A well-respected pain management doctor who blew the whistle on patient safety concerns at a Department of Veterans Affairs facility in Missouri — and was subsequently threatened twice by his superiors with termination — will have just hours more on the job if President Trump doesn’t sign a bill pending on his desk for several days. | Fox News >>

The House Armed Services Committee introduced the National Defense Authorization Act requiring the Trump Administration to outline a strategy for Afghanistan and the Syrian Civil War in order to receive funding. While Secretary of Defense James Mattis has promised a strategy to Congress by mid-July, the NDAA would require the Pentagon to submit a report including a long term strategy by Feb. 15, as well as a report on Feb. 1 outlining a strategy for both state and non-state threats. The NDAA would withhold funds from the administration until an ISIS strategy specifically was supplied.  | The Hill >>

US District Judge Mark Goldsmith of Michigan temporarily halted the deportation of up to 1,400 Iraqis. Most have committed crimes in the US (some decades ago) but say that deportation would open them up to severe persecution due to their ethnic Chaldean Catholic status. The ACLU, which representing the Iraqis, asked Goldsmith to extend the hold to cover all Iraqis facing similar fears of deportation, for fear of persecution based on religion or retaliation for giving American military aid. | NPR >>

IS fighters blew up the 12th century mosque in the heart of the Old City last week, along with its landmark minaret, according to the U.S.-led coalition and the Iraqi Ministry of Defense – an act of destruction that the authorities in Baghdad interpreted as the militants’ message of defeat in the face of the relentless Iraqi offensive. IS released a statement blaming a U.S. airstrike for the destruction. | ABC News >>

Post spokesman Chris Colster said he still didn’t know what, if anything, had happened at Building 5301 — the Aviation and Missile Command building — at the Sparkman Center complex, and he had no information about any casualties or anyone put into custody. “We believe it’s a safe situation, and we can allow people to move back around” most of the post, Colster said shortly before 1 p.m. | CNN >>

The USS Fitzgerald, carrying nearly 300 crewmembers, and Philippine-flagged container ship ACX Crystal collided in waters off Yokosuka in the pre-dawn hours of June 17. Severe damage to the right side and bottom of the guided-missile destroyer flooded the berths of 116 sailors. Navy divers found the bodies of the seven in the ship after it returned to Yokosuka. (Photo Right) | NBC News >>

U.S. Marines are conducting around-the-clock artillery support for American Kurdish partners battling ISIS in its de facto capital of Raqqa. That support has become vital as Kurdish forces have hit fierce resistance as they inch closer to the city center, according to on the ground fighters. | Military Times >>

Veterans and Civilians teamed up for a Kayaking trip down Current River, Missouri, to raise awareness for epilepsy. The project partnered civilians ranging in age from children to seniors and Veterans ranging from Vietnam to active duty hoped to educate the public on how both communities are affected by the illness. “What many people don’t realize is you can get a traumatic brain injury not just from concussion from [improvised explosive devices] but also just from heavy weaponry,” said Chris Wegman of the Salem chapter of the American Volunteers service group. “If your head is anywhere near a muzzle of a large caliber machine gun when it goes off the air pressure alone can do a lot of damage.”  | The Salem News >>

48-year-old homeless Veteran Harold Palmquist is on his second cross country bike ride to support the Phoenix, Arizona non-profit “Veterans and Their Pets” which works with homeless veterans to provide for their pets. The organization provided shelter and services to both Palmquist and his doggy companion, Daisy. They raised $3,500 for the organization on their first trip, and have set a $20,000 goal this time around. (Photo Right) | Capital Gazette >>

People run the AJC Peachtree Road Race for many different reasons. For Master Sgt. Cedric King, he’s trying to prove a point not only to himself but to everyone who sees him on July 4th. King told 11Alive how 9/11 and his service in Iraq changed his life forever; leading him and his family to Atlanta where he prepared to run the Peachtree for the first time. | 13 WMAZ >>