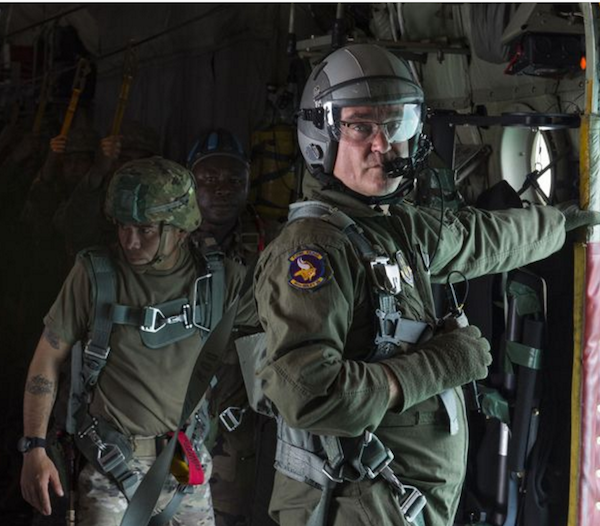 Air Force Master Sgt. James Courneya, left, a loadmaster with the 96th Airlift Squadron, checks with a secondary loadmaster prior to opening the paratroop doors of an Air Force C-130 Hercules during an airdrop during the Central Accord exercise in Libreville, Gabon, on June 22. Tech. Sgt. Brian kimball/DoD | Military Times >>

The brains of eight veterans, all exposed to blasts from high explosives in combat, have been found to have microscopic scarring in the star-shaped cells that line the junctions between their gray and white matter, change patterns previously undetected by medical imaging such as CT or MRI scans. | Military Times >>

Existing transition programs focus almost entirely on the service member, with spouses allowed to attend those classes on a “space available” basis. But because the classes are held during the work day, child care is rarely provided and the ability to sit in can be unpredictable, most spouses do not attempt to attend. | Military.com >>

The decision comes with broader acceptance of transgendered individuals in the U.S. The Obama administration last month ordered that transgender students be allowed to use bathrooms in public schools that match their gender identity. The policy has been met with backlash from social conservatives, some of whom argue that the policy may allow sexual predators to come in contact with children. | CNN >>

Heavy fighting between Islamic State militants and government security forces has claimed dozens of lives in eastern Afghanistan, officials said on Sunday. In recent months insurgents claiming allegiance to Islamic State had largely appeared to be bottled up in a mountainous area along the border with Pakistan under threat of U.S. air strikes. | Reuters >>

Five weeks after a military operation began, a senior Iraqi commander declared Sunday that the city of Fallujah was “fully liberated” from the Islamic State group, giving a major boost to the country’s security and political leadership in its fight against the extremists. | Associated Press >>

More than 100 Islamic State (IS) fighters in Afghanistan were reported killed over the weekend after security forces launched a counterattack against the group in a province near the border with Pakistan. The militants attacked a town in the Kowt district of eastern Nangarhar province earlier this week, torching homes and local police posts. Multiple civilians, including children, were reported killed, and at least 30 people were abducted. | Vice News >>

Navy officials say its Blue Angels will resume performances a month after one of their pilots was killed in a crash while practicing for an air show. In a statement Saturday, Cmdr. Ryan Bernacchi said the elite flight demonstration squadron was grateful for its fans’ patience as it “navigated through this very difficult loss of our teammate.” | Associated Press >>

Over the past 20 years, the military and its partners in industry have figured out how to build lasers and other directed energy weapons. The devices have changed from often-hazardous chemical lasers to more reliable solid-state lasers. The power has grown from dozens of watts to dozens of kilowatts. | Military Times >>

“When I came back after 2006 and I found that I couldn’t use my arms like I used to, I sold everything,” he said. “I pretty much gave up fishing all together. …It was really hard, yeah. I sold my big boat. … I sold all my fishing gear.” | SC Now >>

For the second year in a row, Steve Miller will join a team of paralyzed veterans from across Kentucky and Indiana traveling to Salt Lake City to compete in the 36th annual National Veterans Wheelchair Games at the end of June. Miller, 59, of Olmstead, is a determined Army combat engineer veteran. After an accident left him paralyzed from the waist down in 2013, Miller’s doctor told him he’d never walk again. He decided that would not stop him from continuing to live his active lifestyle, so he became involved with the games and much more when he joined the Kentucky-Indiana chapter of Paralyzed Veterans of America. | Washington Times >>

He sacrificed his body for his country but gave his heart to New York City. Four years ago firefighters at a Midtown FDNY firehouse discovered someone had left a Purple Heart at their 9/11 memorial. The medal’s owner was a mystery. For years firefighters fruitlessly searched for the wounded warrior who honored them with the award. Finally on Friday, the firefighters were able to thank Charles Wayne (C.W.) O’Brien, of Kansas, for the gesture. | New York Daily News >>