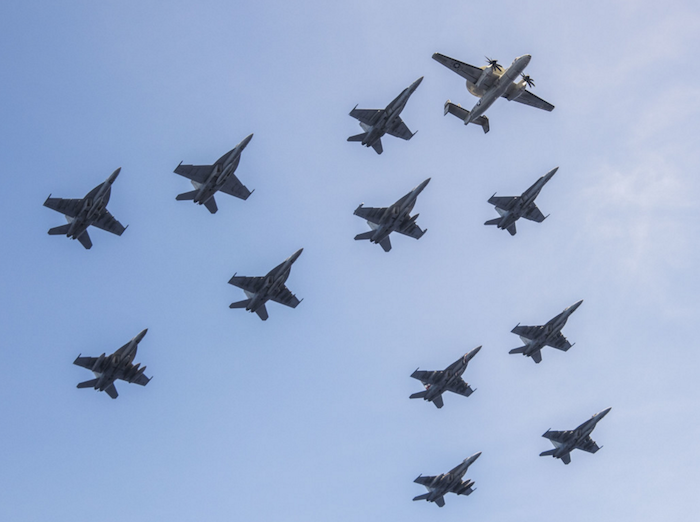 The Department of Veterans Affairs was scolded by both parties over its budget Wednesday as lawmakers scurried to find a fix to an unexpected shortfall of more than $1 billion that would threaten medical care for thousands of veterans in the coming months. Under repeated questioning, VA Secretary David Shulkin acknowledged the department may need emergency funds. | The Washington Post >>

President Trump on Wednesday nominated Marine Corps veteran Thomas Bowman to serve as the No. 2 ranking appointee at the Department of Veterans Affairs, potentially giving the administration another high-ranking official with inside knowledge of the department. | Military Times >>

VA Secretary David Shulkin has told congressional committees in recent weeks he supports a change in law to expand the Post-9/11 caregiver program so that its cash stipend and menu of support services can benefit caregivers to severely injured veterans from earlier generations. | Military.com >>

The al-Nuri mosque, which is also known as Mosul’s Great Mosque, is where IS leader Abu Bakr al-Baghdadi made a rare public appearance, declaring a so-called Islamic caliphate in the summer of 2014, shortly after Mosul was overrun by the militants. The minaret that leaned like Italy’s Tower of Pisa had stood for more than 840 years. | TIME >>

At least 30 people were killed Thursday in a car bomb attack outside a bank in Lashkar Gah, the capital of Afghanistan’s southern Helmand province, officials said. In a statement to journalists, Taliban spokesman Qari Yousuf Ahmadi said the group was behind the attack. | CNN >>

More than 5 million children are in urgent need of aid in Iraq, the United Nations said on Thursday, describing the war on Islamic State as “one of the most brutal” in modern history. “Across Iraq, children continue to witness sheer horror and unimaginable violence,” the United Nations Children Fund (UNICEF) said in a statement. | U.S. News and World Report >>

They had made several rescue attempts into the flooded portions of the 505-foot destroyer, which had collided off the coast of Japan with a much heavier container ship early morning Saturday. But they didn’t know how many of their fellow shipmates were still trapped inside or even alive, and time was running out. | The Washington Post >>

Navy officials have changed uniform regulations for female sailors wearing ball caps and will now allow a hair bun through the cap’s opening, a June 21 Navy release said. It’s a move that reflects reality, as many female sailors had already been quietly wearing their hair this way for years. Chief of Naval Operations Adm. John Richardson decided to push forward after a June 6 all hands call in San Diego. | Navy Times >>

“I don’t consider my sacrifice here great. Their sacrifice- leaving their family for months at a time and coming back wounded mentally and physically, this is a very small sacrifice on my part,” Elizabethton High School teacher Daniel Proffitt said. “What’s something that I can offer them because of what they’ve offered me,” Elizabethton High School teacher Dustin Hensley said. | WJHL >>

There is no one sure way to reach combat veterans suffering from post-traumatic stress disorder, depression, or substance abuse. But a new hip-hop album called Combat Medicine, released Wednesday, might help. It was written and performed by George “Mik” Todd, who goes by the name Doc Todd. He’s a former Fleet Marine Force corpsman – essentially a combat medic – who served alongside the U.S. Marines in Afghanistan. | NPR >>

For a lot of us, fly fishing is one of those things we’ve always wanted to try, but never had the opportunity to learn. PHWFF volunteers don’t have to know how to fly fish, at least at first. Richard Pike will teach you. So volunteering for the various PHWFF program activities affords the opportunity to learn how to fly fish. | Opelika Observer >>