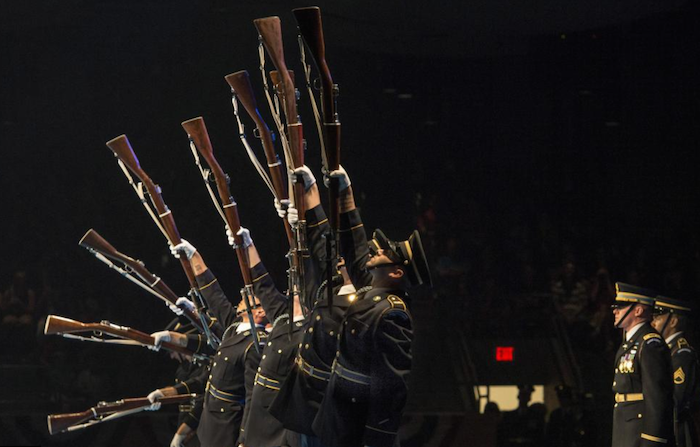 The U.S. House of Representatives on Tuesday passed a bill aimed at increasing accountability at the U.S. Department of Veterans Affairs, three years after the agency was plunged into a major scandal over falsified records. A slew of other reform efforts are underway, but veterans and advocates say the VA remains confusing and frustrating to deal with. | VICE >>

Shulkin, who served as the VA’s undersecretary during the Obama administration, said he does not support privatization of the department but wants to “build an integrated system” that minimizes overlap of services. The VA department should focus efforts and funds on areas of healthcare that the private health sector does not offer, he said, and these needs will look different for each geographic region. | Los Angeles Times >>

The Iraq War killed former Minnesota Air National Guard Tech Sgt. Amie Muller. It just took a decade to do it. That, at least, is how Muller’s family and friends see it. The 36-year-old’s pancreatic cancer, they believe, was caused by exposure to the massive burn pit used to dispose of waste at Joint Base Balad, 40 miles north of Baghdad. Her doctors said there was a strong possibility the burn pit was to blame, but no way to definitively prove a link with the available evidence. | Task and Purpose >>

Masgouf, as it’s called in Iraq, is a whole carp, grilled until black, covered with lemons and doused in spices. The carp had been pulled hours earlier from the Tigris River. But on the outskirts of Mosul, approaching the river can mean risking your life to incoming sniper fire. So how did the major fish out these carp? | The New York Times >>

“He wanted to target a foreign forces convoy,” Abdul Shakoor Quddusi, governor of Bagram district in Parwan province told Stars and Stripes. The boy was captured on a motorcycle near the first gate of the largest U.S. military base in Afghanistan around 9 a.m. with a suicide vest and hand grenades, Quddusi said. | Stars and Stripes >>

Iraq’s army said it had encircled Islamic State’s stronghold in the Old City of Mosul on Tuesday after taking over an area to the north of the densely populated historic district. The army’s 9th armored division seized al-Shifaa district, which includes the city’s main hospitals, alongside the western bank of the Tigris river, a military statement said. | Reuters >>

The United States Coast Guard will on Tuesday start interviewing the crew of a Philippines-flagged container ship which collided with a U.S. warship in Japanese waters killing seven American sailors. The U.S. coast guard investigation is one several into the incident on Saturday involving the guided missile destroyer USS Fitzgerald and the much larger ACX Crystal. The cause of the collision at night and in clear weather is not known. | Reuters >>

The Air Force Surgeon General said Monday that Air Force Medical Service found that endoscopes used for upper and lower gastrointestinal procedures “were cleaned in a manner inconsistent with sterilization guidelines” between April 2008 and April 2016. During that period, 135 patients had procedures using those medical tools. | Air Force Times >>

“Horses, by nature, they’re sort of prey animals, and so they’re hyper-vigilant and reactive to people’s behavior,” said Prudence Fisher, a professor of clinical psychiatric social work at Columbia, who has been co-directing the study for the past year. “If you approach them aggressively they’ll move away from you. So it helps people recognize how they’re approaching people.” | Bangor Daily News >>

Following his time in Iraq Stacy struggled with post-traumatic stress symptoms and emotions of guilt, depression and even felt suicidal. He felt that a sort of healing process in the outdoors was crucial for him and came up with the concept of going back to all the places he’d been during war to climb, ski, or mountaineer and see these places in a more positive light. He felt it was necessary to see Iraq as a place that could hold beautiful memories and not just those of war and trauma. | Teton Gravity Research >>

McLean explained that with the help of Merrick, he felt more comfortable doing things outside of the house. He can even browse through the aisles at the grocery store. When McLean has night terrors, Merrick notices the sweat on his face and wakes him immediately. | Inside Edition >>