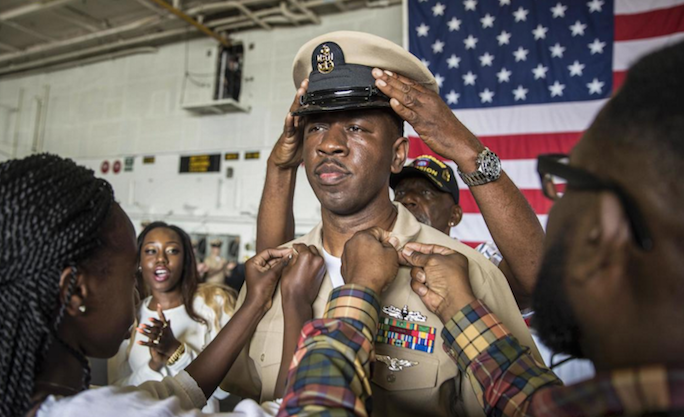 The Senate Veterans Affairs’ Committee discussed 14 bills during a Thursday hearing, five of them to alter the GI Bill. Together, the GI Bill proposals would require at least an additional $360 million in VA spending during the next five years, according to the VA’s written testimony. | Stars and Stripes >>

“The caregivers from pre-9/11 have been providing services for years, and they’ve had no acknowledgment. They’re not acknowledged for what they’re doing and they’re receiving very, very little in the way of services,” former Sen. Elizabeth Dole, whose foundation advocates for military caregivers, testified before the Senate subcommittee on aging Wednesday. | Military.com >>

“As I began to listen to veterans and their concerns, and [veterans service organizations] in particular, it became clear that this would be hurting some veterans and a takeaway from veterans who can’t afford to have those benefits taken away,” Shulkin said. | Newsmax >>

“But you don’t abrogate responsibility,” McChrystal said Thursday on “CBS This Morning.” “So the president of the United States still has responsibility for those decisions, and the American people ultimately still have ownership of those decisions. … They may not agree going in, but when the policy is set, we all have the resolve to follow through.” | CBS News >>

In the coming weeks, President Donald Trump will become the third American president in 16 years to surge troops into Afghanistan. But he will also be the first to hand off to his defense secretary key decisions on the number of troops to deploy, and the strategic aims they’ll be sent there to achieve. | Foreign Policy >>

After more than eight months of fierce fighting, an alliance of Iraqi military, Kurdish forces, majority-Shiite Muslim militias backed by Iran and a U.S.-led coalition have forced ISIS militants back to the last district claimed by the ultraconservative Sunni Muslim group in its stronghold of Mosul. | Newsweek >>

“These force structure gains facilitated by the FY17 end strength increase have begun, but some will take several years to achieve full operational capability,” said Brig. Gen. Brian J. Mennes, director of the Force Management Division, in the release. “Implementation of these decisions, without sacrificing readiness or modernization, is dependent upon receiving future appropriations commensurate with the authorized end strength.” | Army Times >>

The Navy’s 7th Fleet said Mims was found after the crew of the guided-missile cruiser continued to look for him on the ship. He has been transferred to the USS Ronald Reagan for a medical evaluation, and his disappearance is under investigation, according to a news release. | The Washington Post >>

One suspect faces an Article 32 hearing to determine whether there is enough evidence to warrant a court-martial, said Neller, who did not specify whether the suspect is a Marine. Another service member has been administratively separated, seven have received non-judicial punishment, and 20 have received adverse administrative actions. | Marine Corps Times >>

Between the Air Force and Army trials, Garcia earned seven medals in cycling, shooting and swimming. When she first heard about the Warrior Games in February, she wasn’t exactly sure she wanted to participate. It took some encouragement from peers whose injuries prevented them from signing up to convince her. | Northwest Guardian >>

In August, Marine Maj. Jasmin Moghbeli will begin two years of training to become an astronaut, after which she will await a flight assignment. As a Marine Corps AH-1 Cobra pilot, Moghbeli deployed to Afghanistan in 2009 and later did a second deployment with the 31st Marine Expeditionary Unit. | Marine Corps Times >>

“We’ve had a wonderful week, and today’s troopers have thoroughly enjoyed connecting with our awesome veterans,” Thomson said. “To me that is the most powerful part of doing this reunion here in Central Texas. Having you connect with today’s troopers. They’ll be talking about this for the next several weeks and months, and the stories are freaking awesome.” | Fort Hood Sentinel >>