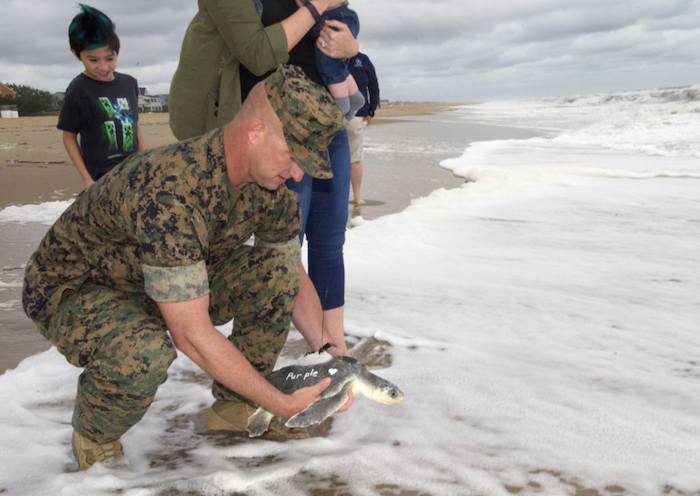 “A year out, a soldier will start being processed out of the Army. The program will help them in building up their résumé, getting information on job opportunities, even getting a three-day leave of vacation time where they can check out employment,” he said. | Norfolk Daily News >>

“The health and well-being of the courageous men and women who have served their country in uniform is the VA’s highest priority,” said VA Secretary Dr. David J. Shulkin. “The PTSD Treatment Decision Aid is an important step in putting Veterans in control of their health care. By helping to bridge understanding and communication between Veterans and providers about the most effective treatment options available, we are ensuring Veterans receive the treatments that best promote their healing and recovery.” | VA.gov >>

A new non-profit in the East is planning to turn an eyesore in Washington into a resource to help female veterans recovering from substance abuse. The Pamlico Rose Institute for Sustainable Communities (PRISC) closed on a vacant home along 3rd St. in Washington on June 1st. The group’s mission is to aid in historic preservation, while also serving veterans. | WNCT >>

The casualty rate shows a stepped-up concentration on fighting the local branch of the extremist group, known here as the Islamic State in Khorasan, which two years ago was dismissed as a small breakaway faction, numbering in the low hundreds, of the much more powerful Taliban. | The New York Times >>

Iraq still has hundreds of millions of dollars sent by Qatar to secure the release in April of members of the Qatari ruling family abducted in 2015, Iraq’s prime minister said on Sunday. Press reports had suggested some of the money had ended up in Iran, angering Saudi Arabia and the other Gulf Arab neighbors of Qatar and contributing to their decision to severe ties with Doha. | The New York Times >>

Saffron is one of the costliest spices in the world. It is sometimes considered as valuable as money, and has been used as such in history. Saffron comes from a flower that grows mostly in parts of Europe, Iran and India. Now, a company in the United States is developing new markets for saffron grown in Afghanistan. | Voice of America >>

The Navy and Japan Coast Guard suspended their search at midnight Sunday for a USS Shiloh sailor who officials say likely fell overboard in the Western Pacific this past week. The sailor was reported missing at about 9:30 p.m. Thursday, while the guided-missile cruiser was conducting routine operations 180 miles east of Okinawa, Japan, a Navy statement said. | Stars and Stripes >>

“Maj. Gen. Richardson personifies the highest standards of the Army and our officer corps,” said Gen. Robert “Abe” Abrams, the commanding general of Forces Command. “Throughout her distinguished career, she has led by outstanding personal example from the front – in combat, and in challenging command and staff positions of great responsibility.” (Photo Right) | Task and Purpose >>

The drill instructor, Gunnery Sgt. Joseph A. Felix, was at the time under investigation for a previous recruit hazing incident yet was working as senior drill instructor in violation of both verbal and written orders from the regimental commander that he and others facing allegations of misconduct not be in that position until after investigations were concluded, Marine Corps officials said. | Marine Corps Times >>

The feeling seems mutual, as the administrators at the Home have nothing but praise for Moore’s contributions there. Moore – who volunteers at the Veterans Home – is originally from Steubenville, Ohio. He has been in Barboursville for nearly five years. | The Herald- Dispatch >>

Colt Romberger, a U.S. Air Force and Iraq War veteran, is carrying his father’s ashes as part of Expedition Orange, a 3,000-mile ride to raise awareness and honor Vietnam veterans suffering from Agent Orange exposure. He’s also on a mission to get other Vietnam War veterans, and their families, to open up about how Agent Orange has affected their lives. (Photo Right) | Today’s News Herald >>

“Adjusting to not being in the military anymore, that was the first time I really started reflecting on things that had happened overseas. I started thinking about watching some of my buddies get killed and some of the stuff I did, too. It’s just – life slowed down, I guess,” he told me recently. | The Salt Lake Tribune >>