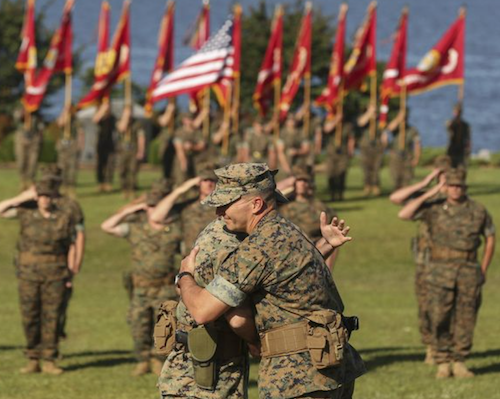 Peters, along with several other senators, had requested the measure as an addition to the annual National Defense Authorization Act. If it is part of the final law at passage, it would write into law a policy that Discharge Review Boards consider petitions to change the discharge status of service members if they suffer from post-traumatic stress disorder or other mental trauma linked to their military service. | Air Force Times >>

Almost 25,000 veterans were examined for traumatic brain injuries by Veterans Affairs medical providers who were not qualified to diagnose them, the U.S. Department of Veterans Affairs has admitted. | ABC News >>

The Navy is taking a stand against sexual assault among the ranks. It wasn’t some boring power point presentation. But an interactive, theatrical performance, all designed to teach sailors how to help themselves, and their shipmates. | WVEC >>

Two suicide bombings that killed about 25 people in Baghdad on Thursday were claimed by Islamic State, whose stronghold of Falluja near the capital is surrounded by Iraqi forces which are now advancing on the city. | Reuters >>

With collapsed roofs and bullet-strewn crumbling walls, the derelict Darul Aman palace has become a symbol of failed attempts to bring peace to war-torn Afghanistan. | The International News >>

Engineman? Yeoman? Not so fast. Now that women will be allowed to serve in all combat jobs, the U.S. Navy and Marine Corps are dropping “man” from some of their job titles to make them inclusive and gender-neutral. | Associated Press >>

The Marine Corps is counting on honest feedback from troops who will wear and test four different tropical combat boot prototypes this summer at the Marines’ Jungle Warfare Training Center in Okinawa, Japan. | Military.com >>

The Cold War might be over, but the U.S. and Russia are once again in direct competition in the race to gain access to the Arctic and project force from the polar region. This reality has raised the stakes and accelerated the clock for the development and production of a modernized U.S. icebreaker fleet … or just a single ship. | Navy Times >>

Many Servicemembers join the military ready to go to war. Others face their toughest battles when they leave the service. Robert Consulmagno, a Marine Corps Veteran, has been battling with more than some can handle since he was a child. At the age of 43, he faces physical ailments, bipolar disorder, and PTSD. | VA Blog >>

The program claims that “Warriors and Wolves” gives veterans the space they need to figure things out. The wolf dogs at Lockwood live in an “in-between” world after being rescued, where they are not quite wolves and not quite dogs- just as many veterans who have served their country do not quite feel like civilians after being warriors. | MY9NJ.com >>

The Warrior Games are a testament to the courage and strength of the men and women who make up our armed services. The adaptive sports competition brings wounded, sick and injured service members and veterans together for an inspiring set of games. | WNCT >>