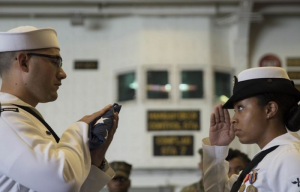 “Missing one text, whether its a technological issue or staffing issue, is one text too many,” said Matt Eitutis, acting Executive Director for VA Health Administration member services. A Government Accountability Office (GAO) audit released earlier this summer found 28.6 percent of texts sent to the VA hotline were ignored. | KMOX >>

Fanning told The Associated Press on Wednesday he’s concerned that two recent mass shootings involved military veterans, but he said the research doesn’t show any cause and effect between military service and what happens after soldiers leave the armed forces. | Fox News >>

The new contracts also will “make it easier for our highly mobile population to enroll and receive care,” said Dr. Karen Guice, acting assistant secretary of defense for health affairs. That’s because care management services are to be enhanced. This along with a merger of two regions should help families with special needs children avoid some current hassles of change-of-station moves, such as interrupted therapy treatments. | Military.com >>

Militants unleashed a series of attacks Wednesday in and around Baghdad, killing at least 18 people, officials said. South of the Iraqi capital, a provincial council approved a decision allowing authorities to demolish homes of convicted militants and banish their families from the province. | US News and World Report >>

His clearest statement came when asked, “is the U.S. going to leave [Afghanistan] again?” “We’ve made an investment there with our people, with our lives,” he replied. “We certainly understand the importance of the area, so, again, from the perspective of the CENTCOM commander — looking forward without the benefit of any policy discussion on that — my inclination would be yeah, we should stay. Yes. These are our partners. We’ve expended a lot here.” | Washington Examiner >>

The Islamic State, pushed off more than half the Iraqi territory it seized in 2014, has suffered a near collapse in revenue from oil smuggling, officials say, forcing it to cut fighters’ pay, levy new taxes, and raise fines for breaking its religious code. | Business Insider >>

“I want to ensure that the folks who are in our armed services in generations to come are as fine as the ones today, and that means continuing to look around and seeing how we can adjust the way we manage our talent,” he said. Carter spoke with 75 officers, presented each of them with a challenge coin and answered some soldiers’ questions.| Chicago Tribune >>

A new unit in the Defense Department’s Office of Inspector General will focus solely on complaints of retaliation against military members who report sexual assault, highlighting a commitment to end the double victimization of victims. | Stars and Stripes >>

Retired Maj. Scotty Smiley, the Army’s first blind active-duty officer, addressed the team July 21 in Las Vegas, a day before the team began its exhibition schedule in preparation for the Aug. 6 start of the Olympic basketball tournament in Brazil. Smiley retired in May 2015 and has toured the country as a motivational speaker, with stories stemming from a 2005 incident in Mosul, Iraq, that cost him his sight — and nearly everything else.| Marine Corps Times >>

Capt. Christy Wise frantically waved her headlamp flashlight in an attempt to alert the boat jetting toward her to turn away. But the HC-130J rescue squadron pilot quickly realized it was too late and dove as far down as she could to save herself. When she surfaced, she knew the boat’s propeller had severed her right leg. | Air Force Times >>

His voice drops deeper and sometimes trails off toward the end of a sentence. There is more weight to his words; each is carefully chosen and seems to sit next to him in the room. Harvey joined the U.S. Navy at 19 because he wanted to do something that would let him hold his head up high. After he got out, the disabled veteran’s experiences in war led to the lowest point of his life. | MLIVE >>